Witcher Wiki
Register
Don't have an account?
Sign In
Advertisement
in: Kaedwenians, Humans, The Witcher 2 Chapter II,
and 3 more
English

Odrin was a Kaedweni soldier in 1271 but preferred to spend his time drinking to the point he had a famous reputation for it and "having a good time."

Sometime after Kaedwen fell to Redania, he fled and ended up at one point near White Orchard in Temeria, where he briefly enlisted with the Nilfgaardians that were stationed there.[1] For two days he proceeded to drink and eat enough for several people before deserting and making his way to Velen. While he was at the Border Post for a time, he complained about not finding a single drop of alcohol[2] before eventually making his way further north into Novigrad and Redania.

Throughout the region he pulled off a number of shenanigans, from claiming he was an Oxenfurt Academy graduate,[3] staying at an inn without paying,[4] stealing mead in Novigrad,[5] or just being a terrible house guest.[6] Despite all this, he felt he was quite the lady's man and even put up a posting that he'd keep any woman company.[7] He could eventually be found passed out from drinking in Novigrad's Silverton district, near the harbors. By 1275, he'd even made his way to Toussaint and tried to make money by leading people to see "immodest" displays of women.[8]

When Geralt first gets to the Kaedweni camp, he notices a trio of drunken soldiers who all seem to be searching for "Odrin". When he asks about this "Odrin", one soldier tells him simply, "you'll know him when you see him".

A while later, Geralt leaves the camp through the southwestern gate and wanders down to the beach below where he finds Odrin, passed out in front of a cave.

To say that Odrin was not shy about drinking is like saying that Iorveth was not shy about shooting humans. Such was his reputation as a drunkard that wherever moonshine could be smelt in Henselt's camp, one assumed that Odrin could not be far off.
A secret, or a full mug of beer – keeping one is easy enough. Keeping both is another matter altogether. During an alcohol-fueled conversation, the soldier provided much interesting information. Given his passion for drink, I was surprised that Odrin had managed to keep the secret for so long. His reputation as a mighty drinker was well deserved, but as a conspirator he was a flop.

Odrin is mentioned in numerous notice board postings in all regions where notice boards can be found. The man himself is found lying on a small dock in the Silverton district of Novigrad, where Odrin and his companions have set up a small business named "Odrin & Friends – Bottlemen". Next to Odrin is a merchant with hundreds of empty bottles for sale. 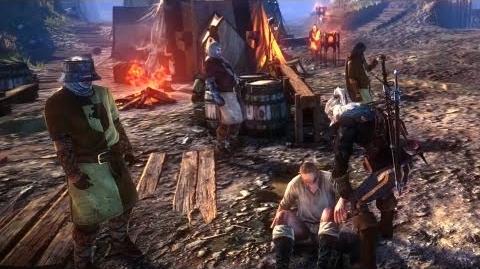 Odrin in all his glory 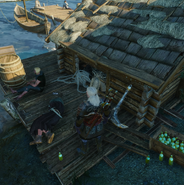