Of His Blood and Bone

Of His Blood and Bone

A Summit of Mages

Where is Triss Merigold?
Of His Blood and Bone is a quest in Chapter III of The Witcher 2: Assassins of Kings. It is only obtainable on Roche's Path, and it is mutually exclusive with completing Where Is Triss Merigold?.

This quest begins if Geralt goes with Roche in the end of For Temeria! instead of saving Triss (who will then be rescued by Letho). You will be fighting a large group of Kaedweni soldiers: swordsmen and shield bearers, along with Dethmold's mercenaries and apprentice who will sit at a distance and launch his spells at you.

After freeing Anaïs La Valette, Geralt can help Roche decide if he honours the promise made to Radovid during the For Temeria! quest

The witcher and the spy went to free the kidnapped Anaïs.
Geralt got through to the tunnel, but that was the easy part. The Kaedweni camp was guarded well, nary a mouse could sneak inside, so the chances of a quite sizeable and ugly albino were slim indeed. Inside it turned out that Dethmold was preparing for the sorcerers' summit. He shielded himself from the outside world with a sound-absorbing barrier, so he could not hear Geralt.
You may be wondering what cunning plan the best Temerian special agent and most famous of living monster slayers had. And so, I hasten to inform that they simply moved forward - Roche to get the crossbowmen, Geralt against the footmen.
And so Roche fought the crossbowmen and Geralt mowed down the men-at-arms, although new soldiers ceaselessly arrived to replace the fallen. An entire garrison must have stood in our heroes' way! This was splendid fun, but it wasn't why the witcher had entered the camp. Our hero's goal lay in the basement beneath the library. Dethmold made his residence there, and thus it was Geralt's destination.
Yet the best of the best barred the witcher's way – Dethmold's mercenaries. These were not green recruits, confused about which end of the spear is used for stabbing. These were veterans, blooded in battle many times over. They had no intention of letting the monster slayer reach their employer, and furthermore, each and every one of them wanted the fame of slaying a witcher. The sorcerer's young apprentice aided the warriors.
And when all the soldiers were dead, only one defender still stood on the battlefield. Dethmold's apprentice, a passionate adept of the magical arts, would not give up his life so easily. He blocked the entrance to the basement with a barrier of pure Power and began hurling fireballs at the witcher. Geralt, however, wanted to get beneath the library as fast as possible, and luckily he knew a great way of dispelling magic. Killing the one sustaining the spell always did the trick.
When the magical barrier disappeared, Geralt descended into the basement and found himself within a dome of magical silence. After the heat of battle, his body felt a tingle of shock upon entering the soundless void. Dethmold soon felt a shock as well. The magical silence he had erected for his own comfort served him poorly, and he was taken fully by surprise when death claimed him.
It was in these circumstances that Dethmold fell at the hands of Vernon Roche, his dying moan smothered by the magical silence. The magical barrier surrounding Anaïs' prison disappeared with his death.
If Geralt convinces Vernon not to bring Anaïs to Radovid:

Anaïs has been freed. Vernon Roche decided she cannot fall into the hands another power's monarch, no matter the cost.
Knights of the Order, sent by Radovid, awaited our heroes in front of the library. Roche cursed terribly, but he has already decided that he will not keep the promise given to the king by giving up the girl. much of knightly blood was shed before Anaïs finally got to the Temerian camp.
With the knights of the Order defeated, Geralt, Roche and Anaïs proceeded towards the exit from the Kaedweni quarter.
Pivotal moments in history often come down to the actions of exceptional individuals in extraordinary situations. This was certainly the case when Geralt chose to hand Anaïs over to the Temerians. No one at the time could have been fully aware of the consequences this decision would bring. As he delivered Foltest's daughter and Vernon Roche to the Temerian interrex John Natalis, the witcher was thinking only of the immediate future. Standing in front of the gate, our hero parted with the others and went to add an epilogue to this story.

If Anaïs is handed over to Radovid:

Vernon Roche eyed the girl for a long time and finally decided to keep his word – that is, to place her under King Radovid's protection.
Our heroes left the library only to see armed men. Luckily they were knights of the Order, sent by Radovid as an escort. In their company Geralt, Roche and Anaïs reached the king's quarters. The girl was handed over to the Redanians.
Pivotal moments in history often come down to the actions of exceptional individuals in extraordinary situations. This was certainly the case when Geralt chose to hand Anaïs over to Radovid. No one at the time could have been fully aware of the consequences this decision would bring. As he delivered Foltest's daughter and Vernon Roche to the Redanian king, the witcher was thinking only of the immediate future. Standing in front of the gate, our hero parted with the others and went to add an epilogue to this story. 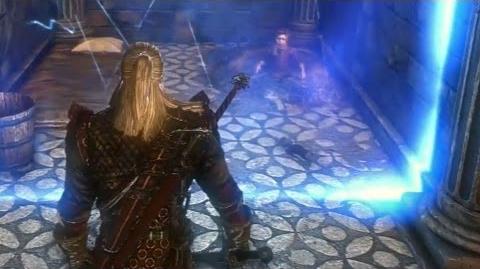