Witcher Wiki
Register
Don't have an account?
Sign In
Advertisement
in: Islands, Locations in the comics, The Witcher locations, The Witcher Chapter V
English

The Witcher
Old manor island is located in the middle of Lake Vizima and where the old manor house was located. Once one of the most splendid places in the capital city, it was abandoned in 1245 when the ostensibly dead Princess Adda returned to life as a bloodthirsty striga.

Although the problem was solved by the witcher Geralt of Rivia, the place is still forgotten and everything seems to indicate that it has become a hideout and base of operations for the Salamandra.

These days the name "old manor" refers to the whole island, not just the manor which is located here. 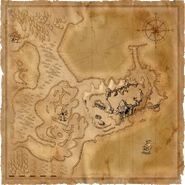 Map of the old manor in The Witcher computer game.