One on One: Flotsam is a quest from Chapter I of The Witcher 2: Assassins of Kings.

When Geralt first enters the Flotsam inn and goes downstairs, he finds a group of men fighting each other with a sizeable audience around them.

Geralt noticed what appeared to be a fist fighting tournament in the Flotsam inn. He decided to test the abilities he had honed on dungeon guards. His first opponent was called Stycho.
The fight with Stycho the Sot was a Cakewalk. The witcher was now ready to tackle a man called Fliparse.
Geralt's next opponent was Kcorb Ransel, aka Fliparse. He fell to the floor as quickly as the one before him. Geralt was in his prime, but the next contender, Tidy Tib, was a famed ruffian.
Tidy Tib was bested! The witcher won the inn tournament! 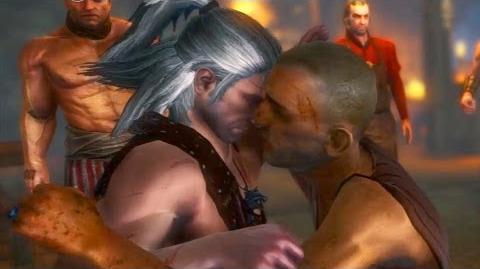 One on One Flotsam (The Witcher 2) Full HD

Retrieved from "https://witcher.fandom.com/wiki/One_on_One:_Flotsam?oldid=511761"
Community content is available under CC-BY-SA unless otherwise noted.