Helping humans in colonizing the Continent by fighting monsters

Unknown monarchs
A number of renegade mages including:

Wiedźmin: Gra Wyobraźni
The Order of Witchers[2][1] was an attempt made by kings and affiliated mages in the 10th century[3] to create an order of magic-using knights who would help Nordlings get rid of enemies they hadn't otherwise been able to subjugate, enclose in reservations, or exterminate – monsters.

The final outcome of the mutations disappointed most of the mages, who began to call the result "witchers", charlatans capable of nothing more than mere witchery. A few renegades however,[2] including Alzur,[4] secretly aided the monarchs interested in continuing the experiment, and the final set of Trials and Mutations was established.

The Order didn't last long however – its members had abandoned most of the original "knightly" values over time and soon split into a handful of witcher schools, aimed at taking a more professional approach to eradicating monsters.

After the earliest attempts at creating witchers with adults proved unsatisfactory, it was decided that children would be used for future experiments. The mage Alzur traveled for weeks, collecting 38 children, before bringing them to Rissberg Castle.

At Rissberg, the children had to train day and night in order to prepare themselves for the coming experiments that the facility's mages had planned. This training included climbing cliffsides, running trap-laden obstacle courses, dodging swinging pendulums while blindfolded, and many other training methods. This training proved to be brutal as, before the mages could even begin their experiments, four of the children had already died. Among the remaining children was a Skelligan boy named Erland of Larvik and an Aedirnian girl named Jagoda.

As the time for the experiments grew close, the children had to start a regimen of bubbling mushroom stews and soapy alchemical teas. At first the children become faster and stronger, but as the experiments continued most girls grew ill, Jagoda among them. As the experiments officially began, the number of remaining children quickly dwindled. Jagoda died within the first week and it took nearly a month for the mages to successfully transform one of the boys before creating the first witcher. A week later, Erland was also successfully transformed. By the time all the children were put through the mutations only five boys remained.

However, the mages kept thoroughly inspecting and testing the surviving children before gathering professionals from all over, including hunters from Kaedwen, alchemists from Vicovaro, and swordsmen from every corner of the continent. These professionals trained the boys in their respective skills: the huntsmen taught them to track and hunt, the alchemists on how to brew potions and concoctions, and the swordsmen on how to fight. Despite all this the children proved unsatisfactory. The mutations had opened their bodies to the flow of power but they ended up with limited magical talent.

Disappointed at this outcome, the witchers were banished from Rissberg but a few mages, such as Alzur, Cosimo Malaspina, and Idarran of Ulivo, decided to continue the experiment. This group ended up bringing the witchers to the abandoned Morgraig Castle in the Kestrel Mountains to continue their experiments and training.

Months before the first generation of witchers were to set out on The Path, their sword trainer was replaced by a knight errant some of the mages had met, Taliesin Bleddyn Yorath aep Lywelyn, but the witchers called him "Gryphon" after the black Gryphon on his shield. He not only taught them the southern sword styles but also spoke to them about their duty and that they were created for a reason. These words in particular resonated with Erland.

In the years that followed, as more witchers were created, they would set out on the path in the spring and take contracts across the continent. They would then return in the winter to the warm fires of Morgraig and spend time with their brothers in the castle, celebrating surviving another year on the path while mourning those who had died.

Fall of the Order[]

Years later Alzur, Cosimo, and Idarran had left, leaving only a handful of mages to perform the mutations and leaving the order without a leader. While the witchers traveled all the known continent and there were more than enough settlements and contracts to cause no strife between them, they started to trick one another out of contracts and even threatening to kill each other if they didn't move on.

One incident proved to be the catalyst for the end of the Order. The witcher Arnaghad attacked another witcher named Rhys, nearly killing him. As Arnaghad returned to Morgraig he did so with a posse of his brothers. After a battle between the Order and the posse, the Order proved victorious despite many losses. Arnaghad and his posse left the Order and traveled to the Amell Mountains where he later founded the School of the Bear, and where years later a group of witchers would betray the School and nearly kill Arnaghad. This group would in turn leave and create the School of the Viper in the Tir Tochair Mountains. Before the establishment of the Viper School another group of witchers left to create the School of the Manticore, as they didn't agree with Ivar Evil-Eye and his ambitions.

After tales reached the Order of these new witcher schools, 20 younger witchers decided they would create their own school which would surpass the Order and get them the respect of the continent. As they left they took a great deal of mutagenic compounds and alchemical tools with them, in the hopes they'd use these to improve the alchemical formula that created witchers. They ended up traveling to Stygga Castle and took on the name School of the Cat and fashioned for themselves Cat-shaped medallions.

The remainders of the Order soldiered on for some time, but becoming more disillusioned with their purpose. Morgraig became more a sanctuary to hide then the warm home it had been. Eventually, Erland decided to leave the order with 13 of his best friends. Intent on not dealing another blow to the Order or causing a massacre, they wanted to cause as little bad blood as possible. As such, they announced that they would leave and explained why to the last remnant of the once proud Order. The group then traveled to Kaer Seren and created the School of the Griffin, having fashioned their school's name and ideas after their old sword trainer, Taliesin, otherwise known as Gryphon.

The last witchers that remained in the Order ended up leaving Morgraig and traveled east, eventually settling down in the Kaer Morhen valley. Here, they founded the School of the Wolf and created Wolf-shaped medallions for themselves, officially ending the original Order of Witchers. The time that came after would be remembered by witchers as the Golden Age while scholars would call it the Second Era of witchers.[5]

It is disputed what the witcher's code is as Geralt only uses it for his convenience and other witchers from different schools do not follow his code. However, it is agreed that one of the tenets of the order is to not kill fellow witchers. Unlike modern witchers, members of the order wore helmets and heavier sets of armor.[2]

Erland of Larvik in the armor 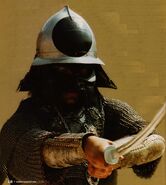