View source
watch 02:17
New Pokemon Games - The Loop
Do you like this video?
Play Sound

Hearts of Stone expansion
The sewers are without a doubt the most dangerous place in which to set foot in Oxenfurt since they are populated by rats and drowners.

Composed of two levels, the higher one and the lower one (the most dangerous and closed for years), the only point of access is the well in the main square of the city.

One day, a new monster appeared in the sewers, infecting all the waters and causing the disappearance of many Redanian noblewomen. As the infections were killing his soldiers, King Radovid V sent a research unit, led by captain Vern Pallack and by the field medic Shani, into the sewers, with the goal of getting a sample from the monster's saliva and creating a vaccine.

The expedition however, was a failure, since all the soldiers in the unit were killed off by various monsters. Shani had luckily survived thanks to their sacrifice and was found by Geralt, who consequently had a contract to kill the monster. Together, the two found the monster's lair and, after Geralt sent Shani away, he lured it out and slew the beast.[1] 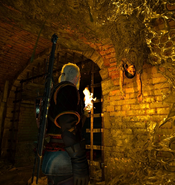