Pacta Sunt Servanda is a quest in Chapter III of The Witcher 2: Assassins of Kings. It was added to the game as part of the Enhanced Edition and is available if you followed Roche's path.

Before turning Maravel or Kimbolt in to Constable Natalis, Geralt should talk to them both. Maravel will reveal the location of several mercenaries who were trying to blackmail Kimbolt. Geralt can then go to the mercenaries' location in order to question them. In the middle of the conversation, Kimbolt's huntsman shows up and threatens the blackmailers. A fight breaks out, during which Geralt can protect the blackmailers. If they manage to stay alive as a sign of gratitude they tell Geralt everything they know and give him Convoy Description and Map. One of them agrees to testify against Baron Kimbolt.

As our hero was delving into the mystery of the bastard's disappearance, he received a message from a man who could very well shed some light on the case. Count Maravel, a nobleman almost as influential as Baron Kimbolt, had dispatched a messenger to invite Geralt for a chat. As members of the Council of Regents, both Kimboll and Maravel had been equally responsible for Boussy and Anais after Foltest's death. Thus, talking to the count could prove worthwhile.
The chat with Count Maravel took quite some time. Geralt now had to rush to find Kimbolt's blackmailers, reach them before the baron's huntsman did. For Geralt merely wished to speak with them, whereas the huntsman was out to silence them.
Better late then never, they say. Though he was later than he had wanted to be, Geralt found the blackmailers mere moments before the huntsman arrived. The witcher's presence only heightened the tension, and a regular battle ensued.
I feel obliged to explain how the blackmailers earned their unfortunate moniker. While talking to them over the huntsman's still-warm corpse, Geralt learned that Kimbolt had hired these men to attack the convoy and kill all the passengers traveling in one of its wagons. They even gave the witcher evidence of the deal they had made with the baron - a map drawn personally by Kimbolt, showing the route the convoy would take, and notes on the forces that would be escorting it. The convoy changed course, and the blackmailers never had an opportunity to attack, yet they felt the baron owed them something. In any case, Kimbolt's intentions were plain for all to see. Convincing documents in hand, Geralt went to see John Natalis to present his charges and the evidence to support them. 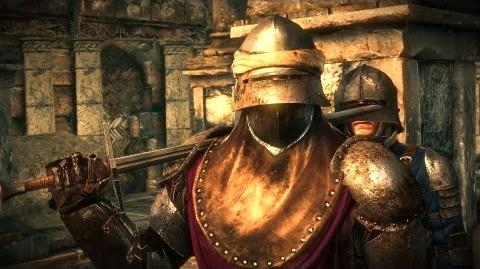