Paulie Dahlberg was a dwarf and part of Yarpen Zigrin's company. His younger brother was Regan.

In February 1266, he was in Kaedwen, travelling south along the Lixela with the company on the orders of King Henselt. They were transporting "special" cargo, watched over by the agent Vilfrid Wenck. One night, after making camp, the company was approached by Geralt of Rivia, Triss Merigold and the young girl Ciri. Yarpin introduced Paulie to the witcher, and they all agreed to let the three travel south with them as Triss was quite ill and needed the wagon to rest.

The group all went south for several days until they reached Shaerrawedd, where nearby he was killed by a dwarven member of the Scoia'tael, who had attacked the convoy, secretly organized by Henselt to see if the dwarves would kill other nonhumans.[2] 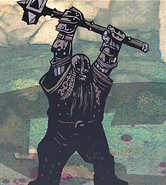 In The Witcher Adventure Game