Prelude to War: Aedirn is a quest in Chapter 2 of The Witcher 2: Assassins of Kings. It's a unique quest in Iorveth's path. In Roche's path, this quest is replaced by Prelude to War: Kaedwen.

This quest introduces Chapter II of the game and sets the scene for what is to follow. We see a cutscene, mostly from the point of view of Prince Stennis of talks between Aedirn, represented by Saskia the Dragonslayer, and Kaedwen, represented by King Henselt.

The talks do not go smoothly and a scuffle ensues which results in the death of a priest, Olcan. His death unleashes the dormant curse uttered by Sabrina Glevissig while she was burned at the stake three years earlier. This curse brings about a solar eclipse and raises the war dead on the field of battle in a strange mist.

Geralt, Saskia and a wounded Prince Stennis must then cross the mist while being attacked by the specters. They accomplish this with the help of Philippa Eilhart in the form of an owl. The sorceress leads the trio through the mists inside a protective circle while beset by draugirs and wraiths. Periodically, the wraiths and draugirs overcome Philippa's defenses, and Geralt must kill the wraiths before the group can proceed.

Near the place, where Geralt fights the Draug later in the Chapter 2, the mist is getting blue and you can get through it to Vergen.

While the good people of Temeria were busy massacring nonhumans and disputing who would ascend to their recently vacated throne, the Aedirnians busied themselves more or less with the same, while admittedly putting more effort into the latter. After Demavend's demise, pretenders to the crown sprang up like mushrooms. Apart from the one powerful noble family, first fiddle in this volatile orchestra belonged jointly to Stennis, Demavend's son, and Saskia, a rebel leading a peasant insurrection. It was no accident that both arrived in the town of Vergen at the same time. Despite wildly different aims, they shared a goal – to repel Henselt's invading army. This story begins with both heading to parley with the Kaedweni ruler.
Aedirn was weak, and Kaedwen was strong. After Demavend's death, the nobility couldn't have cared less as peasant riots rent the kingdom apart from within. The notables wanted only to lick Henselt's boots and strike a deal, even if that meant sacrificing Upper Aedirn. But Saskia, the famed Dragonslayer standing at the head of the peasant army, was a proud and hot-tempered woman. At a time when few knights were to be found among the ranks of the defenders, she was the one to take up negotiations with Henselt. And she was the one to break them off.
If Stennis agrees to duel with Henselt:

Stennis, who was trying at the time to gain support for his claim to the crown, had no desire to be shown up by a common girl. He took up Henselt's gauntlet, accepting a duel that would settle their territorial feud without a battle.

If Stennis declines the duel with Henselt, or threatens Henselt:

Spurred by their pride and ambition, the Aedirnian representation provoked a fight and clashed swords with the Kaedweni legation. Annalists delight in recounting the episode, for it was the first time in history when the king of one land, the heir to the throne of another , and a pretender to that same throne, assisted by representatives of the most eminent families of two nations, pounded each other so eagerly in the middle of a howling backwoods.

A priest sought to stop the duel, but brutally handled by Henselt, he fell. as the holy man's blood sank into the ground, it awoke a terror lurking beneath. A ghastly mist arose above the area. Blood called for blood. Hungry dead rose from the ground.
It was under these circumstances that Geralt arrived on the scene, hardly expecting to encounter a strange, spectral mist so near the destination of his long journey. The witcher appeared on the cursed battlefield at just the right instant, and as it turned out, he was the right man in the right place. Saskia, Iorveth and our hero needed all their strength to fend off the attacking wraiths.
The situation looked exceptionally grim. Luckily, Philippa Eilhart also had Saskia's well-being in mind. The sorceress, having transformed into an owl, appeared on the battlefield to show the party a safe path through the dangerous vapor. Geralt decided to follow her.
With a little perturbation, the group left the mist.
And Geralt could see Philippa Eilhart in human form. The company left for Vergen. 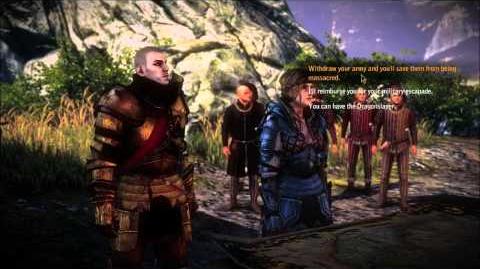