Witcher Wiki
Register
Don't have an account?
Sign In
Advertisement
in: Romance cards, Humans, The Witcher characters,
and 3 more
English

Variable, tend to decrease with age

Variable, ranging from streets to luxury houses such as Passiflora

Meeting with lots of new interesting people
Prostitution flourishes in the world of The Witcher. There are a number of brothels in all three Witcher video games and Geralt is always ready to use those when he happens to be nearby.

There are several prostitutes to be found in the Temple Quarter, while higher class companionship can be found with the courtesans in the Trade Quarter. One is near Golan Vivaldi's house, one is on the Dike, and another is walking around near Ramsmeat's place, to name but a few. Their brothel madame is Carmen. The services of all the prostitutes can be had by paying (obviously) around two hundred and fifty

. All the hookers have the same sex card, so there is no need to get intimate with each of them to collect all the different sex cards available in the game.

Note: The prostitutes will no longer be willing to "service" Geralt if he supports the Squirrels in the Gold Rush quest.

When Geralt completes the Working Girls quest and if he chooses not to accept cash payment, instead telling Carmen that he is "no materialist", the girls will provide their services in exchange for a bouquet of flowers. If he takes the cash reward, then he will only receive a discount on the their services, one hundred and ten

Their calls of "like the look of me?" and "yoo-hoo" can often be heard while strolling through the Temple Quarter.

"Vizima's Temple Quarter offers joys aplenty to those who can afford them." 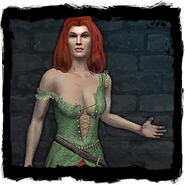 Render of The Witcher 2 prostitute