Hearts of Stone expansion
Quinto was a safecracker famed for his skills throughout the Northern Kingdoms. He had arrest warrants out on him in Kaedwen, Lyria, Angren and Kovir.

In 1272, Quinto had a heavy bounty set on him by a group of bankers he had attempted to steal from. In hopes of claiming the reward, Hans of Cidaris captured Quinto and kept him locked in a cage in his camp near Oxenfurt.

If Geralt chose to recruit him: After a while, Geralt of Rivia arrived at the camp and introduced himself to Quinto. Hans explained that in order for him to let Quinto go, Geralt would need to pay him the same amount as the wanted posters say, or defeat Hans in a fistfight or a game of Gwent. Regardless of how Geralt secured Quinto's freedom, Quinto actually had already freed himself with a fishbone he found the previous day and then learnt about Geralt's plan to break into the Borsody Auction House in Oxenfurt.

During the heist, Quinto did his job and quietly broke into a vault by cracking the lock.

Geralt has taken on a mad assortment of tasks in his life, many of which strayed far beyond his core trade of monster hunting. Recruiting a team to break into the vault in the Borsodis' Auction House, however, stood out as atypical even against this motley backdrop. One of the shady character the witcher was told would make a good candidate was Quinto, the most famed safecracker north of the Yaruga.
Quinto gave proof his reputation was well-deserved: he opened the cage in which the group of mercenaries led by Hans of Cidaris held him using only a fish bone. After this feat, the witcher had no doubt Quinto was the man to fill the gap in his break-in crew.
Geralt stands with Ewald or sides with Horst then demands the papers:

Quinto demonstrated the craftsmanship of a true artist by tickling open the auction house vault doors in the blink of an eye. He also demonstrated the rotten cynicism of a true lowlife by displaying not one speck of loyalty to his companions. In the fight which took place in the auction house's basement, he stood against the witcher - and paid for this mistake with his life. 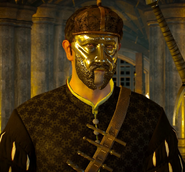 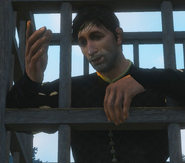