Rainfarn was a sullen and silent knight from the Duchy of Attre. He traveled with Prince Windhalm to Cintra to have him ask for the hand of Princess Pavetta. When the Urcheon of Erlenwald arrived in the castle and asked for the hand of Pavetta too, Rainfarn as many others pretenders, offended by that insult, attacked him and tried to kill him. Rainfarn nearly managed: he drew his hidden dagger and stabbed the Urcheon in the ribs, but when he was about to stab him again, the witcher Geralt, under the identity of Ravix of Fourhorn, disarmed him and hurt him with his sword. Although he was severely wounded in the events that happened that night, he did survive and returned to Attre.

After the Slaughter of Cintra, he fought for the North together with Prince Windhalm and Vissegerd but when even Attre was conquered by the Nilfgaardians and Windhalm was captured by the latters, Rainfarn accepted to cooperate with them, starting serving the Empire and wearing the colors of Nilfgaard, since his alternate choice was a painful death like Prince Windhalm.[1]

Rainfarn of Attre, along with Llinos of Metinna and Guy de Bois-Fresnes, was representing the Empire in the grand chivalric tourney of Toussaint near Beauclair in 1275. It was his seventh year competing. He won the 1269 knights tourney. Palmerin commented that Rainfarn was a coward and was using fisstech. His choice of weaponry was the halberd. 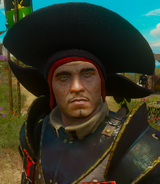