Basements, cellars, sewers and cargo holds.
Rats are medium-sized, long-tailed rodents living in inhabited areas such as Novigrad and Vizima. Before the domestication of cats, rats had been a great problem to human societies, most often solved by hiring a rat-catcher playing on a musical instrument.[1]

Large, savage rats living in the wilderness are called skrekks. Mutated forms of the species are pseudorats,[2] and the cursed people who are able to take the form of half-human, half-rat are wererats.[3][4]

When Geralt run into Triss Merigold in Novigrad she has a contract to get rid of rats in warehouse of some merchant. Then with Keira Metz he has to destroy the rat holes with either bombs or Igni spell to receive 100

for each destroyed nest.

Depending on whether you set option "enemy upscaling" off or on, they can be the weakest or the strongest enemies in the game.

Fighting rats in The Witcher 3 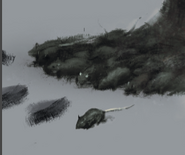