The highest quality iron ores and state of the art technologies were used in the making of Raven's armor, a legendary suit of armor worn by an even more legendary warrior. It was forged in the gnomes' workshops beneath Mount Carbon, but finished by elves. The songmaster Tyen'sail took an interest in the armor and worked for twelve days straight, each movement of his chisel accompanied by a song of power. It is said that the armor sang a song of victory for its wearer, providing him with confidence and calm during battle.

Three variants of this armor are available in the game:

Raven's armor becomes starting equipment if it was acquired by Geralt during The Witcher and a corresponding saved game is imported into The Witcher 2: Assassins of Kings.

The armor was redesigned for the sequel to include a utility belt across Geralt's chest and a book attached beneath it. The inscription on the book when translated from the Common Speech to Polish, reads Dendrologia Stosowana, which in English translates to Applied Dendrology (the study of wooden plants).

Raven's armor in The Witcher 2: Assassins of Kings 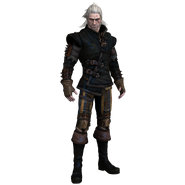 Render of Geralt in armor.
Add a photo to this gallery
Retrieved from "https://witcher.fandom.com/wiki/Raven%27s_armor?oldid=508059"
Community content is available under CC-BY-SA unless otherwise noted.