Witcher Wiki
Register
Don't have an account?
Sign In
Advertisement
in: Lyrians, Mercenaries, Blood of Elves characters,
and 9 more
English

Blood of Elves
Time of Contempt
The Lady of the Lake

Rayla of Lyria,[1] known first as Black Rayla[2] and later as White Rayla,[3] was a natural-born soldier and a veteran of the wars with Nilfgaard. She was a mercenary and later an officer of the special forces of King Demavend III of Aedirn. While she was guarding the withdrawal of civilians from invaded Aedirn, her unit was wiped out by Scoia'tael commandos.[2] She survived the capture, albeit maimed and disfigured.[3]

Rayla was the daughter of an elven woman and a human man, making her a half-elf. She was born in Lyria, where she lived in a hamlet. Her neighbors, however, fearing Scoia'tael commandos, showed nothing but hatred towards Rayla and her family, who were constantly bullied, discriminated against, and beaten. In the end, Rayla started hating non-humans even more than her former neighbors, despite secretly being one of them.[4]

She early became a mercenary and departed for adventures. At some point in her life she met Geralt of Rivia, witnessed his fighting skills, and became impressed by them. She also visited Vengerberg a few times.[1]

She fought for Nordlings during the First Northern War. Later, she participated in a gathering at Bleobheris, during which she watched Dandelion's performance and discussed with other spectators the events described in his ballad.[1]

Some time later, Rayla joined the Aedirnian Special Forces formed by King Demavend. In June 1267, she was tasked with escorting Archmistress Tissaia de Vries to The Silver Heron in Gors Velen. There, Yennefer argued that Rayla, as a "mercenary" fighting for money, would not be able to make sacrifices like the soldiers who fought with conviction and sacrifice, while Margarita Laux-Antille defended the captain. After completing her duties, she left with her unit back to Aedirn.[2]

When the Second Northern War broke out, Rayla's unit was sent by King Demavend to defend Lower Aedirn from Nilfgaardian invaders. However, instead of Nilfgaardians, the unit faced a vanguard of Scoia'tael, who captured Rayla's men and attempted to execute them. Fortunately for them, the elves were all slaughtered by a convoy of Lyrian soldiers who were passing nearby. Surprisingly for Rayla, the unit was led by none other than Meve, Queen of Lyria and Rivia, who was escaping from her country after the Lyrian golpe and was entering Aedirn, where she was hoping to receive military aid from King Demavend. Driven by common interest, Rayla and her men joined Meve's party and headed to Rosberg, where the King was last seen.

Alas, the Nilfgaardian invasion proceeded without obstacle and what remained of Rosberg was burned ruins. One of the few survivors, Xavier Lemmens, informed Queen Meve and Rayla that King Demavend left Rosberg before the siege and was now preparing his defense at Aldersberg.

In the end Lyrians and Aedirnians joined forces and clashed against the Nilfgaardians in what would be later known as the First Battle of Aldersberg. Although Meve and Demavend's troops were defeated and Aldersberg was burned down, the two monarchs managed to save both their lives and those of the citizens of Aldersberg.[2]

Following the battle, Demavend fled to Redania. Before leaving Meve, however, he handed her the Leaden Ring, a token which would've given her permission to enter the enclave of Mahakam and ask for military help from Brouver Hoog, the Elder-in-Chief. The King of Aedirn also tasked Rayla with escorting the Queen to her destination.

In Mahakam, Rayla was forced to leave Meve because she had to return in Aedirn, since Nilfgaardian troops were now heading towards Demavend's capital, Vengerberg.[4][N 1]

After the Battle of Vengerberg was won by Nilfgaard, Rayla's unit protected the civilians fleeing through the Pontar Valley to Temeria. When the Aedirnian army's rearguard was obliterated by Scoia'tael, she ordered her men to stay and become the rearguard themselves, despite their reluctance. She was the last to stand after a fierce battle, surrounded by Scoia'tael. They asked her to drop her weapon, but she replied her sword was too expensive to drop and if they wished to take it, they should break her fingers to do so.[2]

Rayla appears again in 1268 – not with broken fingers but missing her whole hand, replaced by a steel hook. While she survived, she apparently suffered much; even her hair turned white. Calling herself "White Rayla", she was full of rage and hatred towards the Scoia'tael. After the Battle of Brenna she pursued Toruviel's commandos.[3]

Five years after the Battle of Brenna, Rayla continued her hunt for the remaining Scoia'tael while acting as a mercenary for the Order of the Flaming Rose. Leading a unit of Knights of the Order, Rayla arrived in Murky Waters, a small town near Vizima, after hearing of the presence of Toruviel's commandos. After the elves took the villagers hostage, Rayla entrusted the witcher Geralt to tell the elves that she promised a fair trail if they freed the hostages. However, Rayla was then stripped of her command of the unit by an Order adjuntant, citing a letter from Siegfried, in order to take the elves head-on.

During the conflict in Old Vizima, Rayla, still working for the Order of the Flaming Rose, was shot twice in the chest by Yaevinn's arrows, leaving her in a near-death state. Later on, she was found and taken by the Salamandra in order to subject her to their mutation process. She thus survived her wounds at the cost of losing most of her mental faculties. She was then used to attack Geralt, who finally put an end to her life.

Rayla is a character in Thronebreaker. She can be recruited by Meve as a companion at the start of the quest Ashes of Aedirn.

Depending on the path Geralt chose, White Rayla was one of three possible, but mutually exclusive, sexual partners Geralt can have in Chapter V. He will sleep with her if he chooses the Order path.

The hunt for the free elves who had been resting near Murky Waters was led by White Rayla, a mercenary hired by the Order. Rayla is a natural-born soldier and a veteran of the wars with Nilfgaard, during which she was maimed and disfigured. Rayla is used to discipline and has but one passion — she hates elves and hunts them with unwavering ruthlessness.
Rayla surrounded Toruviel's elves in the village of Murky Waters, but the situation got out of control. A fight broke out between her soldiers and the elves.
If Geralt complete the Order path:

I decided to help Rayla during the siege of Murky Waters, thus helping her to defeat Toruviel's elves.

White Rayla returned to Vizima. She was slain by elven arrows as non-humans and knights of the Order clashed in the burning city.
I met the mercenary again. Salamandra found her close to death and subjected her to mutation. Rayla recuperated and , as a mutant, regained her strength in no time. In return for her second life, she had to swear absolute loyalty to her new masters. She tried to stop me and I had to kill her. For good this time. 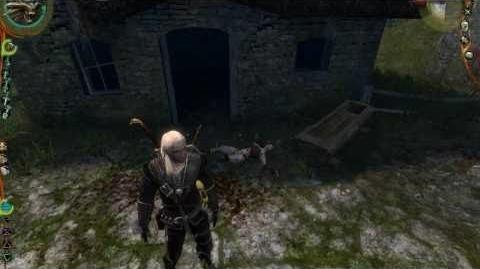 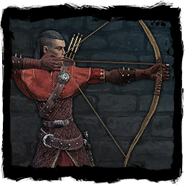