Raymond Maarloeve was a private investigator who ran a business in the house closest to the main entrance to the sewers, Vizima's Temple Quarter. During his early years, he trained under Codringher and Fenn from Dorian, until setting up his own detective firm in Temeria's capital. When the Order of the Flaming Rose basically took over the district he lived in, he became a friend with one of its knights, Siegfried of Denesle, who later on mentioned Maarloeve to witcher Geralt when the former was looking to take down Salamandra and Azar Javed.

He even had a book written about him called "Raymond Maarloeve - A Biography Enhanced".

Raymond Maarloeve was trained in ways of investigative techniques by lawyers Codringher and Fenn, famous for running successful Codringher and Fenn agency in Dorian, and worked for them for some time until he started an office of his own.

At some point in his life, he found himself a wife and together they had a son. At one night, a grisly home invasion happened in which his wife and dog were brutally murdered, and son abducted, by Salamandra. When he returned home, he discovered his wife pinned to the kitchen door with a spear, his dog shot with a crossbow, and his son nowhere to be found. As a professional, he quickly managed to learn who was behind it, but no their whereabouts.

He ran to the City Guard but, with no witnesses and no evidence to go on, the then Captain of the Guard, Vincent Meis, was forced to close the case, which did not again resurface until six months later when a bizarre monstrosity turned up in a trash heap. Raymond was able to discern that the creature was actually his own son due to a unique feature the boy had; a sixth toe, which the monster in the trash also displayed. He has since devoted the rest of his life to find their murderers.

Geralt of Rivia first heard of Raymond as simply a private detective friend of Siegfried's. As Geralt and Siegfried were leaving the sewers, having just killed the cockatrice, they were set upon by Salamandra. After a quick skirmish, Siegfried mentioned that Geralt should go see a friend of his, a detective, who conveniently happens to live in the house closest to the main entrance to the sewers.

Maarloeve decided to work with Geralt to uncover the Salamandra criminal organization's location and intentions as they have had something in common, a hatred of Salamandra spawned from having lost loved ones (in Geralt's case, the young Witcher in training Leo). When Geralt told Raymond that he's specifically looking for Azar Javed, because "his boot is due a rendezvous with his ass", Raymond revealed that he's been investigating Salamandra for some time.

A time after the witcher and detective combined their forces to track down Salamandra, Raymond was murdered by Azar Javed and his identity assumed using illusion. His help prior to his untimely demise, however, did prove nonetheless valuable in uncovering some of Salamandra's operations in Vizima. After he died a dwarven dentist, Zahin Schmartz, moved into his house.

One of the clues to the fact that "Raymond" was no longer the "real" Raymond was that Geralt's medallion vibrated wildly whenever he approached Javed disguised as Raymond. Additionally, a box of fisstech could be seen to have been left lying on the downstairs table at the Detective's house. Upon noticing it, Geralt remarked: "A small box containing fisstech. Must be evidence of some sort. I'd never suspect Raymond of being a user." It is likely that Javed switched places with Raymond after he went into hiding after Geralt saved him from several Salamanders. Indeed, Geralt's medallion had not vibrated during the brief time it took for Raymond to walk out of the house after the fight was over.

Raymond was mentioned one last time at the end of Geralt's journey when the King of the Wild Hunt blamed Geralt for Raymond's death, implying that he thought that if the Witcher were to never have asked for Raymond's help, Azar Javed would have never killed him.[1]

At some point prior to 1272, a book was written and published about him under the title "Raymond Maarloeve - A Biography Enhanced" with one copy being owned by Skellige's Hierophant Mousesack as discovered by Yennefer when she and Geralt searched his laboratory for Mask of Uroboros.[2]

I hired a detective named Raymond Maarloeve to help me search for Salamandra's leader. Raymond, a bitter and cynical man, refused to lift a finger until I paid him. But he also seems to know a lot, including his craft.
Someone has assumed the detective's identity and I can prove it.
I found the detective's body. Someone discovered I was working with him and clearly didn't like that. They killed him and assumed his identity. I need to know why.

Speaking with Raymond provides some journal entries in addition to his own. 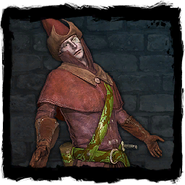