Edit
watch 11:53
'Witcher' The History Of Redania - Witcher Lore - Witcher Mythology - Witcher 3 Lore
Do you like this video?
Play Sound

Field Hetman of the Crown

Redania, named after Roeden,[3] is a wealthy realm which profits from trade and agriculture and one of the Four Kingdoms. The capital city of Redania is Tretogor. Other prominent cities are Oxenfurt, with the largest university in the Northern Realms and the free city of Novigrad. The kingdom's neighbors are Kovir, Caingorn, Kaedwen, Aedirn, and Temeria.

Redania was first settled by the Dauk and Wozgor people before the First Landing, specifically the Gelibol region and the Nimnar valley, according to a classification by the historian Arnelius Grock.[4]

In 1263, during the First Northern War, the Royal Redanian Army, along with the forces of Aedirn, Temeria, and Kaedwen, faced the invading Nilfgaardian Army in Lower Sodden, during the Battle of Sodden Hill. The northern armies were under the united leadership of King Vizimir II of Redania, and were successful in preventing the Nilfgaardian invasion.[2]

After the war, tensions rose with Temeria, and King Vizimir II forced Novigrad into ius stapulae, blocking all merchandise routes and seizing any wares from Nilfgaard or Temeria. King Foltest of Temeria responded by introducing the same law to Vizima and Gors Velen, blocking all Redanian wares, which started to affect the economy as Redania did not have the resources or manufactories to produce their own goods.[2]

King Vizimir II of Redania was assassinated during the Second Nilfgaard War. During the interregnum, the country was ruled by a Regency Council headed by Sigismund Dijkstra, the head of Redanian Intelligence, and Philippa Eilhart, head of the Lodge of Sorceresses. Subsequently, reached the proper age, the country passed in the hands of Radovid V, known as The Stern.

Structure of the society[]

Quite specific is the social structure of this country - the cult of the nobility runs strong in Redania, and higher social stratum possesses more privilege here than in any nearby realm. Great differences in wealth exist among the gentry, but Redanian law cares for birth not property, making a well-born beggar the legal equal of the richest magnate. Those of high birth and great wealth draw the latter primarily from the grain trade and pedigreed horse husbandry.

As a consequence of nobility's privileged position, the peasantry is treated worse here than in any neighboring state, and only the king's iron fist keeps them from rebelling. The government of Redania is also heavily influenced by sorceresses.

On Saovine, Redanian children burn figurines of Falka on bonfires, to remember her famous rebellion.[5]

Redanian steeds are unsurpassed, and thus the Redanian cavalry is among the best of its kind in the world, and with the country's nobility filling its ranks, it is the heart of Royal Redanian Army.

For ages, Redania has fought a customs war with Temeria, its primary rival in the North. Redania possesses the best intelligence network in the world, and throughout history they have infiltrated many of their rivals fellow agencies.

The Kingdom derives enormous profits from trade with Novigrad as well as grain exports. It may be said that the monarchy is the granary of the whole Continent, and even other parts of the world. Therefore, the dominant landscape of Redania is huge, undulating fields of grain. In the 13th century, the state economy became seriously threatened, because of the flow of cheap goods from and others into the country, which constitute serious competition for local artisans. In addition, there are very few manufactories.[3][2]

The colors of the Kingdom of Redania are white and red, and the coat of arms from time immemorial has been the silver eagle in a red field. Of this eagle, the ancient emblem of King Abrad the Old Oak, various motions and forms were, notwithstanding presently the insigne is like King Radovid IV had determined and approved in edict: Gules, an eagle displayed Argent crowned, beaked and membered Or, grasping in the dexter claw an sceptre Or. The eagle is charged on the breast with an escutcheon: Sable a cross Or. Escutcheon is arms of Jamurlak, country located in the interfluve of rivers Buina and Braa ultimately vassalized by Crown of Redania during reign of Radovid the Bald.
Coats of Arms of the Respectable Royal and Knightly Houses, their blazon and history[6]

Over the course of ages the Redanian Eagle changed its form and features several times, diversing number of heads,[7] grasped accessories, presence of crown, inescutcheon and other elements. The current coat of arms of Redania, adopted by Radovid IV, is displayed in the infobox, while some of the historical ones are presented below.

For the main article on Redanian monarchs, see Redanian Dynasty.

Redania
Redania borders Temeria in the north. It is ruled by King Radovid V, also knows as Radovid the Stern, son of the murdered King Vizimir. The monarch was thirteen when his father was killed, so the Royal Council assumed power until the prince came of age. After his coronation, Radovid gained notoriety for dealing brutally with anyone who had previously mistreated him or his mother Hedvig. The most important cities in Redania are the capital of Tretogor, the Free City of Novigrad, which enjoys far-reaching autonomy, and Oxenfurt, with its famous university.
One of the Northern Kingdoms, Redania is a wealthy realm which profits from trade and agriculture. For ages, it has fought a customs war with Temeria, which is its main competitor in the north. The country possesses the best intelligence service in the world. The government of Redania is heavily influenced by sorceresses.

You can find Redanians in their quarter during the third act in Loc Muinne. 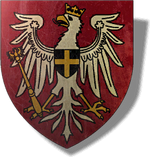 Redania
Situated between the Braa River in the north and the Pontar in the south, Redania is one of the North's more important kingdoms. Its coat of arms is a crowned silver eagle on a red field. The eagle grips a golden scepter in its talons and a small black shield bearing a golden cross adorns its proudly protruding chest. Despite recent unrest, the country survived, unscathed and intact, the crisis that followed the death of King Vizimir the Just. Tretogor, King Radovid's seat of power, is the country's capital, though the Free City of Novigrad is its largest population center. In fact, Novigrad is something akin to the capital of the world - a center and cradle of commerce and culture, where an enlightened man can breathe his fill as long as he does so away from the back alleys. Old, musty and scholarly Oxenfurt, the home of this author's alma mater, is another of the kingdom's noteworthy cities. During the last war with Nilfgaard, Redania joined with Temeria, Aedirn, Kaedwen and other northern realms to repel the invaders, and the Royal Redanian Corps played an important part during the Battle of Brenna.