Redanian Free Company also known as Wild Ones, owing to the boar[1] in their coat of arms, which was adopted from its leader's family symbol. They are an elite fighting unit consisting of experienced soldiers from aristocratic families, who were financed by Redania to support regular forces and the Royal Army during the Third Northern War.

They are fierce warriors fanatically devoted to their leader, but lack the discipline of the regular army. Their skills are as sharp as the blades of their sabers and definitely are not lagging in cavalry as well. As Olgierd himself said, in the bottom of their hearts they are common carousers and roughnecks good for a fight and drink, at least. 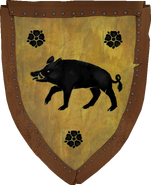