Witcher Wiki
Register
Don't have an account?
Sign In
Advertisement
in: Creydeners, Characters in the comics, The Hexer characters,
and 4 more
English

Edit
watch 02:56
Raise a Floppa - The Loop
Do you like this video?
Play Sound
Sub-Pages:

Netflix's The Witcher
The Hexer

Renfri Vellga[N 1] was a princess and the daughter of Fredefalk, the prince of Creyden, and the stepdaughter of Aridea. She is depicted as a more brutal version of Snow White.

Renfri was born just after a much prophesied eclipse known as the Black Sun though her father didn't appear to let this affect his judgement as he continued to adore his firstborn. However, when her father married Aridea, the new queen proclaimed to use Nehalenia's Mirror which revealed that her stepdaughter, Renfri, would kill her and many others. She then sent word of this to the Council who, in turn, sent the sorcerer Stregobor to investigate.

The sorcerer spied on the young Renfri and reported to have seen her torture and harm other beings and, after a few tests, claimed she was indeed a mutant and cursed from being born during an eclipse. While he later told Geralt he merely wanted to isolate her, Aridea hired a thug to take the young princess out into the forest and kill her and bring back her heart and liver. Instead, the thug robbed and raped her but when he was occupied, Renfri killed him by pushing her brooch through his ear and into his brain. After that, the girl fled, going hungry and cold when she couldn't steal, swindle, or sell herself for food and shelter.

Over the next four years she gained much notoriety and came to be known as Shrike because of her penchant for impaling her victims. She had also reached Mahakam and moved in with a band of gnomes. Meanwhile, Aridea had hired assassins to kill the girl, including almost killing her with a poisoned apple, but Renfri survived every attempt and soon she was so infamous it was difficult to find anyone that would try to kill her as she'd become quite skilled in fighting. Aridea soon after died from being poisoned, but nobody knew who actually did it, as rumors believed it was Fredefalk while Stregobor believed it was Renfri.[N 2]

Shrike and her band continued to rob merchants throughout Mahakam until one day the gnomes argued amongst themselves so fervently none of them made it out alive except for Renfri. Shortly thereafter, she came across Stregobor while still in Mahakam and, remembering him and the part he played back in Creyden, moved in to attack but the sorcerer was able to utter a spell at the last minute that turned Renfri into a slab of mountain crystal. He then buried the crystal in the gnomes' mine and brought the tunnels down, burying her there.

Unfortunately for the sorcerer, a prince from a kingdom to the east found her, paid a hefty sum to reverse the curse, and then took her home with him. The prince's father didn't trust Renfri and tried to question her about the treasure she and the gnomes had hidden. However, he had his eldest son assisting him while Renfri was naked on the executioner's bench and somehow the next day, the eldest son was king, his parents and siblings dead, and Renfri was now his favorite mistress. She didn't remain his favorite for long though and soon left the kingdom in search of Stregobor.

The sorcerer fled from her multiple times: three times in Kovir, once in the Pontar Valley, once in Angren, and finally settled down for a year in Arcsea, in the town of Blaviken. She pursued him each time, eventually surrounding herself with a new band.

Finally, in Blaviken, Renfri was almost ready to exact her revenge when Geralt came passing through. When the witcher met the local mage, Irion, he learned it was actually Stregobor and while Geralt didn't like the mage from past relations, he decided to try and talk Renfri out of her revenge even though Stregobor wanted the witcher to kill Renfri, stating it was "the lesser evil". Geralt soon found her in the local inn, where she agreed to talk with Geralt and the alderman, Caldemeyn. When the latter tried to threaten her with prison if she didn't leave with her band by the next morning, she revealed a letter from King Audoen that made her untouchable. Afterwards, the witcher and the alderman left.

Renfri later snuck into the room where Geralt was staying and told him she still intended to kill Stregobor and there were two options to avoid as much bloodshed as possible: either Stregobor leave his tower voluntarily and Renfri will take him to a deserted area to kill him, or Geralt kill Stregobor himself as the sorcerer would let him into the tower, using the same line that it's "the lesser evil". Geralt refused to kill for her and, while talking, was able to hypnotize Renfri and she gave a cryptic message before she snapped out of the daze. She then stated he'd won and that she'd not try to kill the mage before asking to "spend the night" with the witcher until dawn.

The next morning, however, she took her men to the marketplace, which was due to be their busiest day of the year, with the intent to force either Stregobor's or Geralt's hand by holding the market goers hostage in exchange for the sorcerer. Realizing it was a ruse, Geralt ran to the marketplace to confront her and ran into her band while Renfri went to Stregobor's tower to give him the ultimatum. However, Stregobor laughed in her face, stating she could kill all of Blaviken and the neighboring villages and he still wouldn't come out. When she returned to the marketplace, Geralt had just slain all her men and she drew her sword, despite Geralt asking her to step down. The two then sparred until Geralt cut one of her leg arteries, ending the princess' life. Stregobor, having seen the fight from his crystal ball, emerged, wanting to do an autopsy on Renfri's body, but Geralt threatened to kill him if the sorcerer so much as touched her.

I pity you... You claim a lesser evil doesn't exist. You're standing on a flagstone running with blood, alone and so very lonely because you can't choose, but you had to. And you'll never know, you'll never be sure, if you were right... And your reward will be a stoning, and a bad word. I pity you...
- Renfri to Geralt, pg. 103, The Last Wish (U.S. edition)

Unlike in the short story "The Lesser Evil", in which Renfri is blonde with blue-green eyes, in the movie and TV-series her hair and eyes are very dark.

Also unlike in the books, Geralt first met her when she was struggling with three armored men ordered to kill her by her stepmother, Aridea. The men claimed she was a mutant and a witch. She fled the fight as soon as she could, leaving a dagger in the throat of one of the men and Geralt trying to save himself.

Later, Geralt met her again and after travelling together for a while, she joined the band of seven gnomes. Geralt left her with them, as per her wishes.

Years later, their paths crossed again when Renfri had put together a band of her own and spread terror and fear, amidst rumours of having murdered her stepmother and half-brother's father. She burnt the temple of Melitele in Ellander as per Falwick's orders. As in the book, she died in a duel with Geralt in Blaviken.

Legends of The Witcher The Curse of The Black Sun Renfri 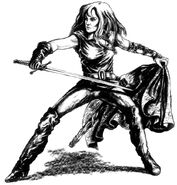