Witcher Wiki
Register
Don't have an account?
Sign In
Advertisement
in: Humans, The Witcher characters, The Witcher Chapter I
English

The Witcher
The Reverend (Polish: Wielebny) is a paranoid man who is the religious leader of the people that live in the Outskirts of Vizima. Despite his religious designation, he seems to run the Outskirts. He leads the people against the witch Abigail, blaming her for the appearance of the Beast, a hellhound.

The Reverend can usually be found praying in the small courtyard in front of the Church, or in his house, next door. He will gladly pontificate on the sins of others and the righteousness of the Eternal Fire.

"The leader of the community in the Outskirts is a domineering priest of the Eternal Fire called the Reverend. His authority reaches well beyond the realm of the spiritual — people from the town and village in the Outskirts do exactly what he says. The Reverend is a religious fanatic and a hypocrite. He easily finds guilt where it doesn't exist, ignoring real offences.
The Reverend lives in the town, just left of the temple. During the day he either prays or tends to the church.
The witch Abigail was probably gone by the time I arrived at the Reverend's. Irreconcilable differences is all I can call it. We argued and I had to kill the priest.
The escalating conflict between the Reverend and the local soothsayer ended grimly. A lynch mob accused Abigail of summoning the Beast and then burned her at the stake.
After tending to the witch Abigail, the Reverend unleashed his congregation on me. I had to kill the priest." 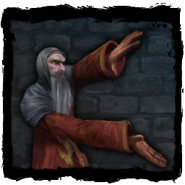 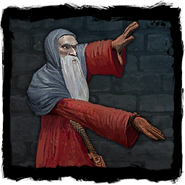