The Rivian Pogrom was an incident which began in the marketplace of the city of Rivia. In 1268, an argument between Nadia Esposito and some dwarves got completely out of control and the entire group gathered at the marketplace descended into chaos as humans went on the rampage against nonhumans. Geralt was killed by the mob during this incident. The mob was dispersed when Triss and Yennefer used their magic, causing hail to rain down and forcing the rioters to flee. It was not the first pogrom nor the last.

The Rivian Pogrom is an in-game book which recounts the tale of this incident.

In The Witcher 2: Assassins of Kings, Geralt begins to remember his past and the tale of the Massacre in Rivia is told during a flashback. According to the game it happened on September 25, 1268. Rivia's population at that moment - 1234, in that 253 nonhumans. During the riots 76 nonhumans perished including Geralt of Rivia who was stabbed in the chest with a pitchfork by a man named Rob. Yennefer of Vengerberg died trying to heal the witcher. Their bodies were taken by Ciri. 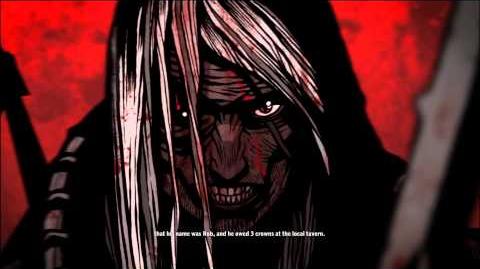 The Witcher 2 Assassins of Kings - The Death of Geralt Flashback