Roderick de Wett was a knight of the Order of the Flaming Rose and a Nilfgaardian Count.

Geralt first meets him in the banquet facilities at The New Narakort in the Trade Quarter in Chapter III. He is a close confidant of Princess Adda and appears quite protective of her in his own manner.

He also enjoys a little dice poker on the side. After the posh reception, he can be found on the upper floor of the guardhouse in the Trade Quarter.

Later, he is found near the Old Manor where he and Geralt have possibly their final confrontation.

I met Count de Wett at Leuvaarden's reception. He hails from Nilfgaard, belongs to the Order of the Flaming Rose and advises King Foltest on behalf of the Order. He is exceptionally loathsome and arrogant, and he came to hate me from the moment we met. De Wett arrived at the party in the company of Princess Adda. I sense there is something going on between them.
De Wett turned out to be the sworn enemy of Thaler, the chief of the Temerian intelligence service."
The Order acknowledged De Wett's achievements and promoted the rat. I don't know what the count did in response, but it apparently pleased his superiors.
The Nilfgaardian spilt the beans. Now I am certain he is to blame for the return of Adda's striga curse.
I killed De Wett in a fight. One less son of a bitch to worry about.

Only if Geralt kills both the werewolf and the striga:

I encountered De Wett's ghost in the Ice Plains. 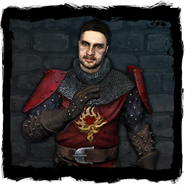 Confrontation of Thaler and Count Roderick at square.