Rotfiends and their larger cousins, greater rotfiends, are necrophages feeding themselves on dead corpses. Rotfiends cease giving XP when killed from Level 25 onwards.

They attack in groups but they are extremely dangerous when they are about to die, as they explode in a poisonous red cloud

What rotfiends are, everyone can see. Even seeing them is not necessary, as hearing their name should be enough to tell anyone what creatures might bear this unpleasant title. The creatures multiplied after the last Northern War and today plague wilderness villages and forest settlements.
Given that they are necrophages, rotfiends feed on carrion and human corpses, though this does not mean they do not attack the living. They appear on battlefields, near cities afflicted by plague, or around villages touched by famine. See a rotfiend and you can be sure there are many more in the area. They appear of a sudden, and disappear even more quickly if threatened, so exterminating them is difficult. Trapping rotfiends makes little or no sense. Instead, they are best dealt with by cutting off their food supply, that is, burning all corpses in the area. Corpses must be incinerated rather than buried, for rotfiends are avid and skillful diggers. Without sustenance, the beasts will leave in search of new feeding grounds.
Both the fast and strong styles can be used to fight rotfiends, though the fast style seems to be more appropriate. Killing a rotfiend is not difficult, yet one must remember to survive the moment of the beast's death, for the monster's corpse releases explosive fumes a mere spark could ignite. The resulting explosion can hurt the witcher, but it might also kill nearby rotfiends, creating something of a chain reaction. Thus, a dying monster should be drawn away from its kin. Backed against a wall, a rotfiend flies into a fury, attacking madly. This attack should be evaded, for the beast's chaotic blows carry a strength that can only be called hysterical. Running is never a good idea when fighting rotfiends, as the creatures will pursue their foe, jump on his back, knock him down and overwhelm him. Stopping rotfiends from escaping can be difficult, unless one has a bomb that will stun the monsters and render them defenseless as they try to burrow into the ground.
Rotfiends are necrophages, so Necrophage Oil is lethal to them. Common poisons, on the other hand, are useless - the beasts have gained immunity to these by devouring carcasses. Rotfiends cannot bleed to death, as their blood congeals very quickly, but all other witchers' techniques, from Signs to traps and bombs, are effective in fighting them.

Course it reeks. Think they're called rotfiends because they smell like roses?
– Vesemir, witcher of the Wolf School
Rotfiends resemble decomposing human bodies that have been stripped of their skin. Their presence is given away by the overwhelming stench of the rot which gives them their name. Devourers are a particularly dangerous kind of rotfiend marked by an insatiable appetite for human flesh.
Rotfiends and devourers were once rarities, but in the present age of constant warfare and violence they have become a veritable plague, particularly around battlefields and in disease-stricken areas. Though they feed mainly on carrion, they will at times attack the living. They usually feed in large groups and thus present a danger to lone travelers – especially considering their speed, which is more than a match for a horse at full gallop.
The rotfiend's decomposing body is filled with gasses which are poisonous even to those who, like witchers, are immune to most other toxins. These emissions are also highly flammable, meaning any spark, not to mention a carelessly-cast Igni sign, can lead to an explosion. This is particularly likely after a rotfiend dies, when its body thrashes around in uncontrollable tremors.
Rotfiends and devourers feed in the twilight hours and at night, when they become much more dangerous than during the day.

Similar to ghouls and alghouls, rotfiends roam in packs. They can be found in typical necrophage prowling grounds such as the deep wilds and sites littered with decomposing bodies. Rotfiends are fast and adopt similar basic tactics and moveset with drowners, although they have a self-destructive body mechanism that pose a unique hazard for would-be opponents. When a rotfiend's health is cut to a certain point by anything that is not a result of Burn, their body will undergo an uncontrollable spasm that ends in an explosion, damaging anything caught within the radius. When the animation leading to the explosion play, Rotfiends become immune to any kind of damage, leaving no means to prematurely kill them.

This explosion could do considerable damage to other nearby foes; that includes fellow Rotfiends that might immediately undergo similar process, thus creating a deadly chain reaction. This can be a great advantage for players, but extremely dangerous in tight spaces.

If the self-destruction of are found undesirable for combat advantage, one could try setting the Rotfiends on fire; Rotfiends killed this way would disintegrate less violently. If the fire alone couldn't kill them, the burning animation could prevent the creatures from undergoing the "spasm", giving enough time for Geralt to mutilate them with the Silver sword.

Another tactic is to use the downed finisher. Rotfiend that are knocked off their feet are vulnerable for the context-sensitive instant kill move. Rotfiends disposed this way will spew out toxic gas as they die, damaging anything else nearby except for Geralt, who gives them the killing blow. One should take note, however, that knocking down a Rotfiends will require considerably powered-up Aard sign. 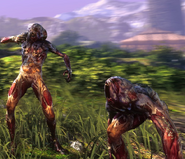 Rotfiends in The Witcher 2: Assassins of Kings