Witcher Wiki
Register
Don't have an account?
Sign In
Advertisement
in: The Witcher locations, The Witcher Chapter V, The Witcher Epilogue,
and 4 more
English

The Witcher 3: Wild Hunt (interior only)

The Royal Palace in Vizima is a castle that once served as the seat of power for Temeria's King Foltest and his court. It was built after the abandonment of the previous seat of Temerian monarchs due to problems with a striga.

The castle was completed around the time when King Foltest's previous seat was taken over by a striga, the product of the ruler's incestuous affair with his own sister. Spacious stone halls, stained glass windows and vaulted ceilings indicate that dwarven engineering was employed here. King Foltest is a very active ruler and often travels, though when in Vizima he usually occupies his chambers and generally remains at the castle with his modest court. In the throne room, the King grants audiences to his subjects, be they petitioners or trusted advisors.

The Royal Palace is a region in the third game but limited to one location, the interior of the palace itself and the current Emperor of Nilfgaard, Emhyr var Emreis, who now occupies it. The courtyard has a secret room containing an old letter. 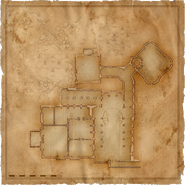 map in The Witcher