Daughter of the Kaedweni Wilderness

Time of Contempt
Baptism of Fire
The Lady of the Lake

The Price of Neutrality premium module
The Witcher 2: Assassins of Kings
Gwent: The Witcher Card Game

Sabrina Glevissig of Ard Carraigh was a Kaedwenian sorceress and an advisor to King Henselt as well as a member of the Lodge of Sorceresses. She was related to Jade Glevissig.

In the 1180s, Sabrina was studying at the magical school of Aretuza on Thanedd Island. She made friends with the young Yennefer of Vengerberg, which developed into a rivalry, and the two graduated together in 1186.[1][2]

In June 1267, she was invited to the Grand Mage's Conclave on Thanedd, and arrived on the last night of the month, the night of the banquet. At the beginning, she talked to Yennefer with her company, the witcher Geralt of Rivia, and the two exchanged some courtesy as well as hidden insults and parted ways. She then later talked with Marti Södergren about Geralt, who stood near them and could hear what they're saying. They talked mainly about his relationship with Yennefer and how they didn't understand how he could date her. Sabrina then said that if she had the chance she would bed him even on rocks; going as far to eavesdrop on his conversation with Dorregaray of Vole.[1]

After everyone was fast asleep, she joined her Northern allies in the early hours of dawn, and started to arrest the traitors allied with Nilfgaard. As Radcliffe and her were leading a dimeritium-shackled Vilgefortz out of his room, his assistant Lydia van Bredevoort attacked them from the side, though in the scuffle Lydia was killed by her own blade, likely at Vilgefortz's orders. Sabrina, Triss Merigold and Radcliffe were dealing with her body when Geralt was brought in. She was then sent by Philippa Eilhart to get Marti Södergren out of bed, as Hen Gedymdeith was dying and needed treatment.[1]

First meeting of the Lodge of Sorceresses

On 5th of August, 1267, Sabrina was one of the sorceresses invited to Montecaltvo by Philippa Eilhart to attend a meeting and officially form the Lodge. Sabrina was firstly hateful against Francesca Findabair for betraying the Brotherhood and siding with Nilfgaard. She also expressed her distrust against Assire var Anahid, for she thought she was spying for Emhyr. Amongst other, she also accused Philippa for spying for Dijkstra, because they used to be lovers.

When Philippa Eilhart revealed that the Lodge will be formed only by women members, Sabrina suspected that it is because her newfound sexuality. But she also stated that men are indeed mentally unstable, subjecting to emotions and under critical circumstances non-reliable.

Sabrina, afraid that the Lodge will require becoming apolitical, warned everyone that she will not give up her political influence. Mainly because she served king Henselt and the kingdom of Kaedwen, but also because Nilfgaard would hunt down the sorceresses for the loss in the Battle of Sodden Hill. She unintentionally insulted Assire for her looks.[3]

Second meeting of the Lodge of Sorceresses

Sabrina was personally present to the second meeting of the Lodge in Montecalvo. At the beginning, she refused to eat oysters and said that she prefered venison on plums. The dish was immediately brought on order of Philippa.

When Francesca Findabair teleported in, accompanied by Yennefer and Ida Emean aep Sivney, Sabrina hatefuly stated that only Vilgefortz is missing, as a toxic note against Yennefer.

The meeting started by disscusing the war events and current world troubles. Sabrina declared that for preserving the future of magic they should mainly serve the purpose of sorcerers meaning their role in society and service to their allegiances, in order for everyone to understand the necessity of magic and sorceresses.[3]

She often wore provocative outfits to underline her beauty and had dark long hair, which was matched by her diamond and onyx earrings. To the ball on Thanedd, she wore a black chiffon blouse and a crimson skirt with a side slit that went up to the hips.[1]

Sabrina appears in this premium module for The Witcher, originally released without voices in April, then re-released as part of the The Witcher: Enhanced Edition in a fully voiced version in September 2008.

Based in the surroundings of the Kaer Morhen stronghold, The Price of Neutrality finds Geralt coming back to the witchers base of operations for the winter. Coming across a small camp near the stronghold, Geralt meets a nobleman and Sabrina Glevissig, who are trying to find a young woman staying in the stronghold.

Born under the Black Sun and prophesied to ruin the world, Deidre is Eskel's surprise child and the sister of the nobleman who wants to make sure she will not have the crown. Sabrina wants to kill her as well to examine her body and discover the truth about the Black Sun — being a witcher, Geralt has to choose who he sides with.

Sabrina stays in her very luxuriously appointed tent in the camp across the ford from the keep. She uses a particularly impressive illusion to bring her interior décor up to her standards. This décor also includes a "boy", actually a young man, presumably conjured to help her while away the lonelier times as she waits for Deidre to be delivered to her. She also dabbles in sales.

and she will buy wolf pelts, basilisk hides, books and most potion ingredients.

Sabrina Glevissig is one of the most powerful and influential sorceresses in the Northern Kingdoms. She lives in Ard Carraigh, Kaedwen's capital, acting as an advisor to King Henselt. The sorceress, who is sometimes unceremonious and quick to judge, is justly called the "true daughter of the Kaedwenian wilderness." She often underlines her somewhat predatory and vivid beauty by donning provocative outfits.
Sabrina arrived at Kaer Morhen while pursuing Deidre Ademeyn. She suspects the girl of being a mutant affected by the Curse of the Black Sun, which renders her a monster, a serious threat to the human race. To prove this contention, the sorceress must capture Deidre and subject her to detailed testing.

Inconsistencies with the books

"The Price of Neutrality" takes place before the Witcher saga, even though in the books Geralt first met Sabrina on Thanedd Island, in Time of Contempt. 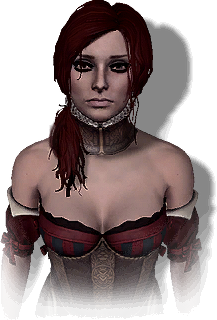 Sabrina Glevissig is a secondary character in The Witcher 2: Assassins of Kings.

The sorceress Sabrina Glevissig was from Ard Carraigh, the capital of Kaedwen, and had been King Henselt's advisor. The reader, however, should not be deceived by that term – this true daughter of the Kaedweni wilderness was famous for her determination and temperament. There was no exaggeration to the rumors that on many occasions she would interrupt the King, thumping her fist on the table and yelling that he should shut up and listen - and the King would indeed shut up and listen. Sabrina Glevissig's predatory nature was paired with an equally predatory beauty, which she emphasized through appropriately chosen attire. Add to that the power she commanded as a sorceress, and it should become clear to what she owed her strong position not only in Kaedwen, but also beyond its borders.
This position could not protect her from the king's wrath, however, and when she failed Henselt one time too many, the sorceress ended up at the stake, where her life ended.
If Geralt chooses Roche's path during the end of chapter I:

Sabrina cast a curse on the monarch and the battlefield with her dying breath. Many years later we were to feel the effects of this malediction.
Sabrina had become a martyr in the eyes of some soldiers, thus possibly achieving greater esteem in death than she had enjoyed in life.
It cost Geralt a great deal of sweat, but he finally found a solution to the problem. Sabrina's spirit finally found solace, and the curse she had placed on Henselt was lifted.

There is a gwent card with her name. It is part of Geralt's initial base deck for Northern Kingdoms. 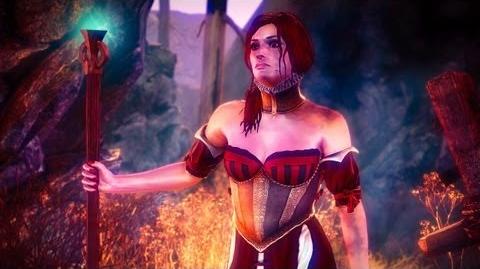 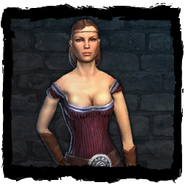 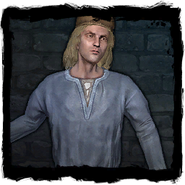 At the gathering of sorceresses