View source
watch 10:25
What Is The Salamandra - 'Witcher' Lore
Do you like this video?
Play Sound

The Witcher
The Witcher 2: Assassins of Kings
The Witcher 3: Wild Hunt (mentioned)
Salamandra was a criminal organization led by a Zerrikanian sorcerer named Azar Javed active throughout the Northern Kingdoms, particularly in Temeria with their main base and hideouts in its capital city of Vizima. The origin of this group is unknown, though one could find ordinary lackeys, trained assassins as well as renegade mages among their ranks.

Members of the organization wore a symbol depicting a salamander, the fire lizard, usually tattooed on their head, but sometimes elsewhere.

In May 1270, a large contingent of Salamanders attacked Kaer Morhen, the Witchers' Fortress, and stole the secrets of the mutagenic substances and stimulants, so closely guarded by the School of the Wolf for hundreds of years.

After parting ways with fellow witchers and arriving in Vizima, Geralt began to discover more and more about Salamandra: its whereabouts, its way of generating money and modus operandi. Hunting down the Salamandra organization and finding its leader became his driving motivation.

After the leaders died and the majority of the gang was defeated in Vizima, the Salamandra for practical purpose ceased to exist. However, many of its members in other parts of the kingdom like Flotsam began to form their own local syndicates dealing fisstech.

One kind of loot item which could be found on the remains of the Salamandra were their badges (also called brooches). They also tend to carry illegal swords.

In Chapter II, Geralt must speak to a mysterious man called "the messenger" who can be found at The Hairy Bear as part of the Wanted quest. He has to find out who the messenger works for so that he can sell the badges and get more information.

Salamandra was added to the game as part of the Syndicate faction with the Iron Judgment expansion. The gang consists of 10 cards not counting tokens and includes such individuals as Azar Javed, Savolla and Professor, as well as various mutants and henchmen. The following lore node from the Iron Judgment event tree refers to the Salamandra:

People have many flaws. They're cowardly. Corruptible. Fickle. Many kings and philosophers lamented this fact. And the Salamandra? The Salamandra acted. Using stolen witcher mutagens, they created new, better people. Resistant to pain. As strong as a bear. As obedient as the most disciplined soldier. And, most importantly, devoid of any conscience.

Legends of The Witcher What is The Salamandra 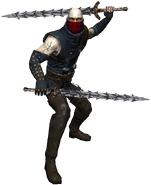 A masked warrior or mage