View source
watch 10:26
Witcher Lore: Witcher Guilds: The Scoia'tael
Do you like this video?
Play Sound

Throughout the Northern Kingdoms

Scoia'tael are non-human guerillas also known as the Squirrels, due to the squirrel tails they wear on their hats/caps, that they primarily live in the forest, and that they eat nuts.[1]

Racism and deep-seated discrimination against non-humans inflamed a great hatred of humans amongst non-humans in the Northern Kingdoms. Most of the Squirrels were elves, however it isn't uncommon to find halflings, dwarves, gnomes and half-elves among them.[1] Scoia'tael were divided into commandos (considered to be a gnomish term) comprised of several fighters.

Bigger, more highly promoted commandos were rare and strictly established during battles or for special tasks (e.g. during the Thanedd coup). The most well-known Scoia'tael special tasks group was the Vrihedd Brigade, commanded by Isengrim Faoiltiarna. They were identified by their silver lightning bolt symbol.

Scoia'tael were allied with Nilfgaard and used by Emperor Emhyr var Emreis for diversion, as well as support for the Nilfgaardian Army. In exchange for their support, Emperor Emhyr var Emreis gave the elves Dol Blathanna as their own, independent state, and made Enid an Gleanna its queen. After the Peace of Cintra, they were condemned as outlaws even by their elven queen.

In 1263, at the start of the First Northern War, the Scoia'tael were established, starting a guerilla war over the following years, attacking trade caravans and northern army regiments, such as Beeches and Badger Ravine, hoping that the Nilfgaardians would be successful in their invasion, and that the elven rule may reinstated if all the humans were killed. They continued their campaign for a while, with the goal of pushing back the "humans to the sea", and the phrase becoming a war cry in their attacks.[1]

In February 1266, they attacked a fort in Kaedwen, laying waste to many soldiers in a brutal battle. Afterwards they were tipped off by Kaedwenian soldiers to Yarpen Zigrin's company, that was leading a "special" convoy through the woods. At the elven palace of Shaerrawedd, a regiment attacked the company, as well as Geralt, Ciri, and Triss, who were travelling with them. The group killed Vilfrid Wenck, Paulie Dahlberg and Yannick Brass, before the Dun Banner arrived and slaughtered the elves. Demavend III of Aedirn afterward set up a specific group called the Aedirnian Special Forces to repel the forces.[1]

In 1267, after Foltest, Demavend, and Henselt spent a year conducting operations against the Scoia'tael, their numbers were greatly reduced and the commandos were forced to retreat to the forests in smaller groups. The members captured were tortured in town squares, and left to rot on roadside posts, pecked to pieces by the crows and ravens, as a warning to other members.[2]

Although there are some cases where they fought as vanguard (like during the sack of Vengerberg or during the Battle of Brenna, Scoia'tael usually remain hidden in the woods, where they wait in the vegetation for a convoy or a cavalry squadron to ambush.

When it comes to buying equipment and weapons, since they're rejected by the society and by most of the merchants and weaponsmiths, Scoia'tael usually deal with Havekar, local smugglers who can provide them with supplies and arms at high prices.

Elves
"The Scoia'tael are a group of elven and dwarven rebels fighting against the discrimination of nonhumans. They are divided into commando groups, or independent squads. Their protest against racism quickly turned to violence. Scoia'tael rob merchant caravans, plunder and burn villages, and kill. Instead of finding a peaceful solution, humans send troops to fight them. Scoia'tael means 'squirrel' in elven and the name probably comes from the rebels' habit of attaching squirrel puffs to their clothing.
According to the author of "The Aftermath of the War", the Scoia'tael are inspired by Nilfgaard and other powers. The leaders of the rebellion send their people to certain death because they are blind or manipulated. The author also claims that wars between humans and non-humans will never cease because there is too much hostility between the races. In his opinion, the elves are doomed to extinction." 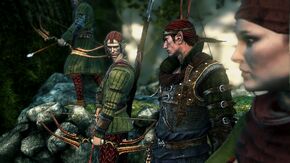 The book The Feudal Society and Its Enemies provides a journal entry on dwarves and squirrels.

Scoia'tael is a name used by the rebels fighting for nonhuman freedom. In the common tongue it means "squirrels". As some would have it, it is because of squirrel tails that adorn the rebels' caps, or from the forest board they had to survive on. Scoia'tael formed units over a score strong, consisting mainly of elves, yet sometimes dwarves and halflings joined too. During the last war against Nilfgaard, the Scoia'tael fought on the side of the Empire, making diversions and great damage beyond our lines. Despite the provisions of the Peace of Cintra, many did not disarm and continued to fight, especially when it turned out that Nilfgaard sacrificed them in the name of peace and gave the units' leaders to the Nordlings to be executed.

Although the Scoia'tael play a less important role in The Witcher 3: Wild Hunt due to the Third Northern War, there are appearances of several camps and a few side quests revolving around the elves.

They also have their gwent card deck containing all important leaders, dwarves, elves, and hav'caars.

Terrorists or freedom fighters? Squirrels, or Scoia'tael as they call themselves in the Elven tongue, is a common name for various nonhuman splinter groups that forcefully oppose the racial inequality resulting from maltreatment by humans on the Continent. Their name comes from their lifestyle: living in forests and frequently changing locations, these small communities are highly mobile and always ready to strike when no one expects them. Consisting mainly of elves, the Scoia'tael also harbor members of other races, such as dwarves and halflings. A typical unit is formed by joining several members of a given group; the larger ones, with a few dozen members, were generally task-oriented, put together for a specific mission. The objectives of such groups vary from assassinations and battlefield diversions to trade route harassment and espionage. The Socia'tael's symbol is a squirrel tail attached to their hats or other parts of their garments. As for their political affiliation, the group was once allied with the Nilfgaardian Empire, and in return Emhyr var Emreis provided the Elves with their own country, Dol Blathanna—then forced the Free Elves to disown the Scoia'tael as war criminals, leaving them to fend for themselves in a hostile North.

Scroll 1: Not many on the Continent understand Elder Speech – the language of the elves and dwarves. That said, all are familiar with the word "Scoia'tael," or Squirrels – warriors who fight for the rights of non-humans... And don't shy away from cruelty...
Scroll 2: Thrown into crowded ghettos, harrassed at every street corner, elves and dwarves awaited the perfect moment to strike back at the callous kingdoms of the North. That moment came during the war against Nilfgaard. As the Imperials crossed the border, the non-humans began their fight from within.
Scroll 3: As devoted allies of Nilfgaard, no mission for the Scoia'tael was too risky – no sacrifice too great. Yet when it turned out the Empire had overestimated their own might and were forced to seek peace with the Northern Kingdoms, the newborn alliance quickly began to unravel...
Scroll 4: Betrayed by Nilfgaard, despised by the Northern Realms, the Scoia'tael were in no position to achieve victory. Yet, by no measure did this mean they would surrender. Overcome with hatred, they continue to fight – not for victory, but vengeance.
Chest 1: The Scoia'tael's identifying symbol is a squirrel tail pinned to the belt or cap. Perhaps it has something to do their nimbleness and agility in the forest. If not, then their decision to use this particular rodent is indeed puzzling. Not least because in the regions with the greatest Scoia'tael presence, squirrels are on the brink of extinction. Oh, the irony...
Chest 2: The Scoia'tael do not employ the rigid hierarchy of traditional armies. The partisans are divided into groups called commandos, each usually about a dozen strong. The unit's commander is typically a warrior who has displayed exceptional bravery... As well as extreme cruelty toward humans.
Chest 3: It is worth emphasizing that not every non-human supports the Scoia'tael. Many perceive the partisans as shortsighted, naive rebels who likely do more harm than good. The sharpest criticisms of the Squirrels, interestingly enough, came from none other than Brouver Hoog... Characteristically ignorant to the nuances of non-human affairs, most humans nevertheless lump them all into the same group.

Concept art for The Witcher 2