The Lady of the Lake
Season of Storms (Polish: Sezon burz) is the sixth Witcher novel and eighth overall book in the series written by Andrzej Sapkowski. It is not a follow-up to the spin-off of the Witcher series proper, but instead a midquel, set before "The Witcher" short story but after most of the other stories in The Last Wish.

The book was published in English on 22 May 2018 and translated by David French. It's available in hardcover, paperback, and digital format.

Geralt of Rivia is a Witcher, one of the few capable of hunting the monsters that prey on humanity. A mutant who is tasked with killing unnatural beings. He uses magical signs, potions, and the pride of every Witcher - two swords, steel and silver.
But a contract has gone wrong, and Geralt finds himself without his signature weapons. Now he needs them back, because sorcerers are scheming, and across the world clouds are gathering.
The season of storms is coming...[1]

In December 2014 Fonopolis and audioteka.pl released audio play based on Sezon burz, lasting about 13,5 hours and voiced by 84 actors, including Krzysztof Banaszyk (Vernon Roche in Assassins of Kings) as Geralt, Anna Dereszowska as Yennefer, Sławimir Pacek (minor characters in video games) as Dandelion, Karolina Gorczyca as Lytta Neyd and Krzysztof Gosztyła as narrator. It was the first book from The Witcher series released directly as audio play – previous books were released as classic audiobooks in 1990s, and re-released as audio plays in 2010s.[2]

Part of the novel was adapted and expanded as The Witcher: Fox Children comic book by Dark Horse Comics. Blurp says that: Geralt's journey leads him aboard a ship of fools, renegades, and criminals—but some passengers are more dangerous than others, and one hides a hideous secret![3] 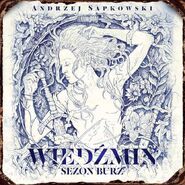