Serrit was a witcher of the School of the Viper and a member of the Kingslayers sent to the Northern Kingdoms by Emperor Emhyr var Emreis to wreak havoc. He, along with his brother-in-arms and fellow Viper, Auckes, took part in the attempted assassination of King Henselt in the Kaedweni camp near Vergen. Even though he was unsuccessful, he was not killed by Geralt like Auckes and managed to flee the scene, only to be later found and disposed of by Síle de Tansarville to cover the Lodge of Sorceresses' role in the regicides.

Alongside Auckes and Letho, Serrit met Geralt of Rivia when he saved Letho's life in Angren. The Viper witchers agreed to help him find the Wild Hunt, who had kidnapped Yennefer, as thanks.

During the winter solstice (Midinváerne) of 1270, Serrit took part in the battle of the Hanged Man's Tree, where the witchers faced the riders of the Hunt. Despite their skill, the witchers couldn't defeat all the warriors and a stalemate ensued before Geralt offered himself in exchange for Yennefer. The remaining witchers left with Yennefer in tow.

After her return, Yennefer was feverish, delirious, in agony, and suffering from amnesia. Out of respect for Geralt, the witchers took care of her until she was better. However, Yennefer turned out to be quite a handful, trying to seduce Auckes to drive a wedge between the witchers and causing the group endless trouble in Nilfgaard, a kingdom known to have strict rules on mages that could result in her being killed for her unruly behavior. To try and protect her, the group wandered through the provinces of the empire pulling Yennefer out of whatever trouble she would find herself in until one day they got caught by the imperial secret police.

They were questioned separately, but no violence was used. After the interrogations, Letho got an offer from Emperor Emhyr var Emreis himself: kill as many northern kings as he could, and in recompense, the emperor would rebuild the School of the Viper; Letho agreed and recruited some of his fellow Vipers into the task, thus creating a group that would be remembered as the Kingslayers. Like his comrades, Serrit was initially affiliated with Iorveth's band of Scoia'tael and received sanctuary from them in-between assassinations.[1]

Later, Serrit and Auckes were tasked with assassinating Henselt, the king of Kaedwen. After making their way through the Kaedweni lands, the two witchers made their hideout in a network of caves located near the Kaedweni camp and spent their time there, waiting and planning.

The day of the strike they cleared some harpies outside the cave and proceeded to met with Letho. After a short conversation about the presence of Geralt in the Kaedweni camp and their next move, the witchers set out on their mission. They used the time they had in the walk towards the camp to discuss the events that were to go down at Loc Muinne.

After infiltrating the Kaedweni camp, Serrit secured the palisade while Auckes took care of the ground floor. The witchers met by the cave entrance and once there they killed the knights protecting the king. Serrit then came into Henselt's tent and slit the throat of the messenger there, only to be confronted by Geralt; unfazed, Serrit attacked, but failed as Geralt used the sign of Aard to expel him from the tent. Auckes joined Serrit, resulting the witchers being forced to fight their former companion. While Auckes was cut down by Geralt, Serrit decided to flee after narrowly avoiding attacks from Síle's magic and successfully escaped to the Kingslayers' hideout.[1]

Alas it was to no avail, for Síle tracked Serrit down to deliver him a painful death in an attempt to cover up the Lodge of Sorceresses' hand in the regicides. Geralt, who was on the Kingslayer's trail, managed to find the Viper clinging on to life. With his dying breath, Serrit confirmed Geralt's suspicions about Síle's involvement, offered an apology for leaving him behind at the Hanged Man's Tree, and began to discuss how close they got to vanquishing the Wild Hunt and freeing the world from the omen of war. The witcher succumbed to his wounds shortly after.[1]

Sometimes a person's name sinks into memory and brings fear to one's heart at its first mention. Who was the mysterious Serrit? What goals drove him and what role would he play? Geralt had yet to learn all of this.
If Geralt chooses Roche's path during the end of chapter I:

The vision of Auckes' memories lifted the veil of secrecy surrounding the other kingslayer. Serrit had also been acting on Letho's orders, and all three had been behind the deaths of Foltest and Demavend, as well as the attempt on Henselt. Serrit could certainly answer more questions, and Geralt knew where to find him.
Unfortunately, Síle found the assassin first. With his dying words, however, he confirmed de Tansarville's complicity in their conspiracy, as well as the fact that he knew Geralt. Serrit died before saying anything more, leaving the mystery unsolved.

Serrit was probably one of the witchers Roche had mentioned. He and Auckes trying to cover Letho's escape when Síle located their hideout. Though both died in the end, they completed the task, buying the last kingslayer time to flee.

Serrit was a lot more hot-headed than Auckes, complaining about the lack of action they had in the past days and being anxious to assassinate Henselt, claiming it would be an easy target due to his recklessness. He also didn't seem too troubled by the fact that the king also had a sorcerer and a witcher in his retinue, despite the latter being Geralt. Pragmatic, he cared little about the life of Triss Merigold and Síle and advised that they should be killed to prevent them from revealing their plan.

He seemed to hold Geralt in high regard, thinking of him as a skilled fighter, a friend and a man who could teach him about life in general, this is reflected in the Notes of the kingslayer named Serrit. He also shared an affection for bear traps with Auckes. According to a Scoia'tael prisoner in the Kaedweni camp, Serrit was very proficient in Elder Speech, much more so than Geralt. 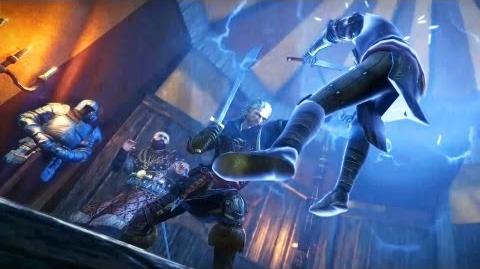 Serrit and the other witchers on the Hunt's trail