Shaelmaar from the Emperor of Nilfgaard
The Monster of Tufo

Rolling up into a ball and charging its target

Shaelmaar (Polish: Szarlej) is a large creature that spends most of its life underground in burrow tunnels leaving only at times. It's sometimes used to entertain crowds in the arenas against human opponents, such as gladiators in Nilfgaard or knights in Toussaint.[1]

Shaelmaars are completely blind and rely on an echolocation, a mechanism based on how sound waves bounce off potential obstacles, not unlike bats.[2] The existence of this large beast is also essential to giant centipedes, who consume the creatures that eat shaelmaar droppings.[3][4]

The earth's innards are home to mighty strange and fearsome beasts. Were they ever to decide to ramble up to the surface, we'd all be gutted the very first day o' the invasion.
– Ramus Vendenratz, Mahakam foreman.
Shaelmaars spend most of their lives deep underground, having no contact with the world up above. At times, however, a shaelmaar will dig its way to the surface and devour any men within its reach. Some shaelmaars also burrow tunnels close to the surface, collapsing buildings and causing tremors in the process.
Since shaelmaars are blind, they find their way by sensing vibrations and listening for sounds. Thus the best tactic when fighting such a monster is to hurl something heavy or noisy against a nearby boulder or wall. Then pray silently that the beast will roll towards the sound and knock itself out upon striking into the obstacle.
Clumsy shaelmaars might seem easy targets to hit, but when even your strongest blows bounce off the thick armor plating their backs, you realize they've little need to dodge. When threatened, a shaelmaar will curl up in a ball and roll forward with tremendous impetus, becoming an unstoppable force crushing everything in its path.
A witcher's best bet is to stay out of a charging shaelmaar's way and strike after its charge fails, revealing its vulnerable underbelly.
A witcher of particular cunning and agility will use the Aard Sign or a bomb (Samum works particularly well for this purpose) to cause the shaelmaar to slam into an obstacle at full speed, significantly lowering its fighting ability and opening the witcher's path to victory. Trying to disorient a shaelmaar in this way is a risky maneuver, but can be effective, especially when third parties are threatened.

As Shaelmaar is a Relict beast, usage of relict oil will help to deal more damage, especially after Shaelmaar's rolling charge. Dodge and attack while the creature is stunned. Prepare Samum bombs and use Aard to attract the beast to the walls. Quen helps protect Geralt, but a single hit can remove the protection.

Axii will momentarily stun Shaelmaar, but it can't be hurt in this state. Wait around the exterior edge of the arena and wait for Shaelmaar to use its armored charge attack. Bait the attack by staying far away from Shaelmaar, and wait near the walls so you can begin attacking immediately after it collides after a successful roll-dodge. After losing 2 / 3rds of its health, back-off and wait for the creature to complete its stone AOE attack.

Arena fight vs. Shaelmaar On the expansion promo screenshot. 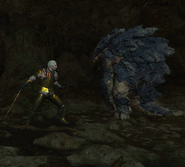 Comparison of human and shaelmaar's height. 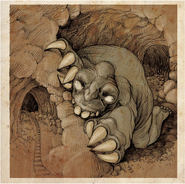