q1011_rita
She's No Early Bird is an optional quest in Chapter I: Geralt finds Vesna, a local barmaid, in trouble on her way home from work.

Vesna remains at the inn until after Geralt speaks to her. Then she will leave every evening at 20:00, and can be found in danger as early as about 20:15. If Geralt leaves the inn and heads north at this time, he will see a group of men threatening to rape her. If he approaches, he must decide whether or not to help her.

If Geralt kills her attackers, he can offer to walk Vesna home. (If he lets her go home alone, she will be killed.) She lives with her grandmother southwest of the Reverend's chapel; if you can get there before 21:00 you will only have to fight two scripted groups of barghests (each near a shrine). After 21:00 you risk additional barghests, ghouls, and (if you take the long way) drowners. Vesna is vulnerable to attacks, so make sure you direct monsters away from her (she can still knife-fight in a pinch, though - let her pick off stunned enemies).

After a successful escort, Geralt can suggest another meeting, giving you a chance of receiving her Romance Card.

Successful walk Vesna home: Another group of barghests. I wonder where they all come from. Apparently, we don't have far to go. I must protect Vesna as we near her grandmother's house.
Fail to get Vesna home: 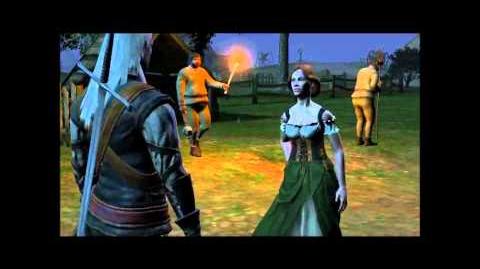 The Witcher She's No Early Bird and Vesna Sex (Hard) HD
Retrieved from "https://witcher.fandom.com/wiki/She%27s_No_Early_Bird?oldid=489848"
Community content is available under CC-BY-SA unless otherwise noted.