The Witcher 2: Assassins of Kings
The Witcher 3: Wild Hunt (dependent)

Sheala de Tancarville or Síle de Tansarville[1] was a sorceress from Creyden and one of the founding members of the Lodge of Sorceresses. She was among the most powerful and respected mages in the North. Even other members of the Lodge feared her, with perhaps the exception of Philippa Eilhart, Francesca Findabair, Assire var Anahid, and Yennefer of Vengerberg. Unlike her colleagues, Sheala was not known to interfere in politics and instead dedicating her days to research. She even resigned her seat with the Council of Wizards because it interfered with her work. Sheala liked to dress in a strict, black velvet gown trimmed with pearls and often wrapped a silver fox boa around her neck. Queen Zuleyka of Kovir once sought her magical assistance in getting her son away from the evil influences of the "bad crowd" he had fallen in with. Sheala was also known as the Koviri Loner.

Sheala was invited to the meeting of sorceresses in Montecalvo's castle by Philippa Eilhart. At first Sheala was reluctant to join, since her scholarly work kept her occupied, but she changed her opinion later on.

She was also the one who named their secret organization "The Lodge."

The Tower of the Swallow[]

After the king of Kovir, Esterad Thyssen, experienced a bad dream, he began seeking the aid of some kind of astronomer or fortune teller, when his wife, Zuleyka, mentioned that Sheala happened to be in Lan Exeter. The king refused to seek her help.[2]

In fact, Queen Zuleyka was Sheala's informant and it was the sorceress who had influenced the king's dreams. The two women had made a deal in which the queen was to provide personal information regarding the king's thoughts on the secret loan that Redania obtained from Kovir, in exchange for Sheala's magical aid in helping Prince Tankred to distance himself from the company he had been keeping, as well as to stop "chasing skirts" until he was introduced to Ciri of Cintra. It was also revealed that Sheala was in league with Philippa Eilhart.[2]

The Lady of the Lake[]

Sheala and Philippa were planning to introduce Ciri to Prince Tankred, so that she could become his lover and give him a child. The child was to ensure the future and status of the Lodge. After the birth, Ciri was to become the Lodge's new member. They needed to invent a new surname for Ciri, so that their plan could work. Sheala offered Ciri to take hers, in that case she would be known as "Cirila de Tancarville", but she refused, preferring to be called "Cirilla of Vengerberg."

When the Lodge decided whether or not to allow Ciri meet Geralt one last time, Sheala voted against it to teach Ciri discipline.

Síle appears in The Witcher 2. In the English version of the game, her name is spelled "Síle de Tansarville"; Síle is the traditional Irish spelling of the name. Geralt meets up with her in the town of Flotsam where he learns that she has been hired to rid the port of the dreaded Kayran.

Triss and Geralt meet her after she successfully repelled the Kayran from the Flotsam harbour. The witcher discovers Síle knows him and notices the tension between the two sorceresses. They agree on hunting the beast together. In the meantime, the sorceress hires Zoltan Chivay to polish some diamonds she could use to build herself a megascope, an apparatus performing many complicated magical operations and enabling her to communicate with other sorceresses.

When it comes to fighting the beast, Síle lures the kayran to the shore and helps Geralt slaying it. She then harvests some rare ingredients from the corpse. As Philippa later claims, they were needed to cure Henselt's impotence and thus make the king trust a sorceress and allowing Síle to his court.

It is no wonder then that after leaving Flotsam she is found by the king's side and attends the negotiations between prince Stennis and the Dragonslayer. When the mist of Sabrina's curse descends, de Tansarville defends the Kaedweni king and manages to escape with him and Dethmold back into their camp.

During the quest "Enter the Dragon", she attempts to teleport away from Loc Muinne, unaware that her megascope has been sabotaged by Letho. Geralt can choose to remove the flawed diamond to save her life, or leave it alone causing her to be torn to pieces.

I know from experience that magicians are not above lusting for power. Among sorceresses alone, there are many whose ambition leads them pull strings, moving kings and other mighty forces of this world. To command the elements in spectacular fashion, summon genies, bend fate, dictate royal proclamations, or at least to force others to eat chicken with cutlery. That is why magicians such as Síle de Tansarville, known as the Koviri Loner, stood apart from the others. Lady Síle was not known to interfere in politics, at least not visibly, instead dedicating her days to research. Strict, calm and collected - unlike other sorceresses, she did not display her feminine charms. Nor did she flirt with men, jiggling her posterior before them at every occasion. Though -and I must remain true to myself here - the world would undeniably be a much poorer place without typical sorceresses.
The reason for Síle de Tansarville's presence in a backwater town like Flotsam was initially a mystery, yet it quickly became clear that she had come there because of the kayran - a river monster. For sorcerers gladly use the organs of exotic creatures as ingredients for magical preparations, and Síle was no exception.
Síle's presence also turned out to be a lucrative opportunity for Zoltan, however odd that might sound. The dwarf cut gems for her magical apparatus.
One has to admit that Síle's help proved to be useful. The sorceress did not fear the monster and bravely fought, aiding the witcher with her powers.
It appears Síle had very specific plans concerning the King Henselt of Kaedwen and his attempts to father a heir. From what we've been able to tell, the meddling of Síle and other sorcerers in the world of politics was further-reaching than anyone had imagined.
If Geralt chooses Roche's path:

Meeting Síle in Henselt's camp came as a slight surprise. On the other hand, it was hard to ignore her arguments – another regicide would plunge the north into utter chaos, and she did not intend to let that happen.
The sorceress helped to repel the attackers, once again proving that her powers should not be underestimated.
The posthumous examination of the would-be assassins' memories revealed something shocking – Síle had been directly involved in at least one ruler's death. Things were getting increasingly complicated... Unfortunately, the sorceress had already managed to flee the camp.
The interests of the sorceress and the assassins were no longer the same. It appears that de Tansarville began to cover her tracks, beginning with the elimination of her former allies.
Following the sorceress was no easy task. The Koviri fled for Loc Muinne, always one step ahead of Geralt.

The shocking truth about Síle de Tansarville and the more important pieces of the puzzle concerning her role in the events in the north would not be fully revealed for some time, but Geralt chanced upon the first clue of her complicity by pure coincidence. One of the dreams stolen by the harpies pointed to her as the one who had commissioned the assassination of the king of Aedirn, Demavend.

If Geralt removes the flawed diamond from Síle's megascope during the quest "Enter the Dragon":

The sudden failure of the megascope would have had tragic consequences, but Geralt's heart was soft. Síle disappeared from Loc Muinne and there was no further news of her.

If Geralt does not remove the flawed diamond from Síle's megascope during the quest "Enter the Dragon":

The sudden failure of the megascope had tragic consequences for Síle, whose life came to a grisly end. As they say, magical travel can be hazardous to your health – consult a doctor or a folk healer first.

If Geralt saved her life in The Witcher 2, Síle appears in the prison at Oxenfurt along with Margarita Laux-Antille. Síle's wounds from her capture are too substantial and inevitably causes Geralt or Yennefer to give her a merciful death.

Geralt and I both knew Síle de Tansarville, the Recluse of Kovir, the once proud member of the Lodge of Sorceresses who in her day plotted, persuaded and spellcast the world into a shape of her liking. Síle always claimed she acted only out of concern for the good of magic and mankind, yet the blood of a great many people stained her hands, including that of kings who stood in the way of her aims. She took part in countless conspiracies and herself devised many intrigues in which the witcher often figured as an unwitting accomplice, obstacle or incidental victim.
Thus Geralt's prior meetings with the sorceress were stormy at best. On at least one occasion it could be said that Geralt saved Síle's life, but this did not mean he felt very warmly about her.
Be that as it may, the sight of the tortured and maimed sorceress in King Radovid's dungeon made the witcher's cold heart swell with sorrow and sympathy. Perhaps it was these feeling, or perhaps it was simply respect for a defeated former enemy now suffering at the hands of cruel fanatics, that made Geralt take pity on her. Aware of what fate awaited her if she lived, Síle de Tansarville was grateful to be given a dignified death, one free from torment and humiliation. 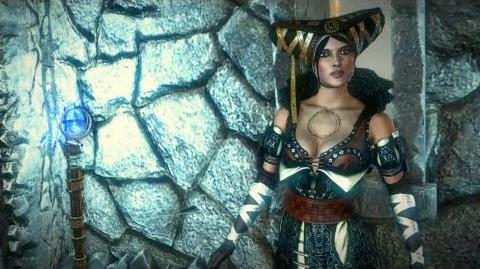 Síle, Triss and Geralt in conversation

Síle talking to Geralt in room