Baron Shilard Fitz-Oesterlen was a member of the Nilfgaardian aristocracy and ambassador to Redania and latter member of the Guild of Merchants. He was known for his sophisticated use of language which was considered comprehensible only to other diplomats and scholars.

Because of his extensive contacts with the intelligence community, he was accused of being a Nilfgaardian spy, pronounced persona non grata in Redania and dismissed from office by Dijkstra. Despite the prior accusations of spying, he was sent by the emperor Emhyr to conduct peace negotiations with the monarchs of the North leading to the Peace of Cintra.

Born in a noble and influential Nilfgaardian family, Shilard, continuing the family tradition of four generations, started a career in diplomacy, eventually working as an ambassador for Imperator Emhyr var Emreis in Redania after decades of service. There, he knew and worked with several spies of the Nilfgaardian Secret Service, led by Vattier de Rideaux.

In 1267, after the assassination of Vizimir II, Shilard was summoned by Sigismund Dijkstra, head of the Redanian Secret Service and member of the Regency Council, to be declared a persona non grata in Redania following the uncovering of Vattier's network of spies, only saved of execution by his diplomatic immunity.

In 1268, Shilard represented Nilfgaard during the Peace of Cintra negotiations, in which he denied any Nilfgaardian involvent in the Kaedweni annexation of Upper Aedirn and protected the autonomy of the Dol Blathanna Freehold. Inbetween the talks, Shilard was visited by Berengar Leuvaarden, Imperial envoy and member of the Guild of Merchants, who informed Shilard of Emhyr's order to accept the Northern Kings' claim for the repatriation of Nilfgaardian settlers in Northern soil. At Shilard's disbelief, Berengan began to explain Emhyr's and the Guild's plans for economic supremacy over the Northern Kingdoms.

Shilard Fitz-Oesterlen is a main character in The Witcher 2: Assassins of Kings. Geralt meets him while he is talking to King Foltest, in the Camp of Foltest's army during the Prologue. The ambassador does not reveal why he is there or what his intentions are. Throughout the story, Geralt crosses Shilard's path many times, finding out how this sly diplomat is involved in the political changes of the Northern Kingdoms and in the murders of kings.

If Geralt chooses to rescue Triss from the Nilfgaardians in Loc Muinne, he takes Shilard hostage. When they come before a company of soldiers, their leader, Renuald aep Matsen, points a crossbow on Shilard, revealing that he was ordered by the capital to execute him before following through and killing the ambassador. In his body, a letter addressed to Emhyr can be found, in which he confesses his distrust towards Renuald and his intentions to kill Geralt for knowing too much, both being possible reasons for why he was killed.

If Geralt doesn't rescue Triss, Shilard attends the summit, where he uses Letho to frame the Lodge of Sorceresses for the regicides.

Many Northern kings appear in this story: rash and thoughtful, amorous and frigid, brave and cowardly. The reader should easily see that should their crowns be removed and a pitchfork, sword, a bunch of bills, or a goat's apple given in a scepter's stead, they would be as human as we are. The same, however, could not be said of the Emperor of Nilfgaard, the White Flame Dancing on the Barrows of His Enemies, whose shadow fell over all the events I written down. In this case, that shadow was represented by Shilard Fitz-Oesterlen, a consummate diplomat who started more than one war, only to end it accepting homage from the defeated.
If Geralt chooses to kill Aryan during Prologue:

It was difficult to guess the role of this black-clad Imperial emissary, yet even such an unskilled politician like Geralt could easily assume that nothing Fitz-Oesterlen did was done out of fancy or by chance. He also had reasons for giving a helping hand to the witcher and Marie Louise, yet these reasons were revealed only much, much later...

If Geralt chooses Roche's path during the end of chapter I:

We met Shilard again in King Henselt's camp, which was not surprising, since Fitz-Oesterlen always circled monarchs like an old vulture circles a carcass. The discussion he had with Geralt brought no hard facts, but a careful listener could take more from the questions the Imperial diplomat asked offhandedly, than from the answers he offered the witcher. He was interested in the situation in the north, the sorcerers and their summit in Loc Muinne, as well as in seemingly unimportant trifles. Either way, I already suspected back then that he was playing a game of the highest stakes.

The meeting with Shilard during Geralt's visit to the camp was not as friendly as their previous ones. It turned out that Shilard's gambit saw the witcher as a pawn blocking the way to Triss Merigold. Shilard intended to use her in his political intrigues, and, since Geralt had become an inconvenience, the envoy ordered him killed without a second thought. Then he headed for Loc Muinne.

I do not know the nature of the deals which linked Fitz-Oesterlen and Radovid V the Stern, but one could easily assume that they served the Empire's political interests first and foremost. Geralt had had enough of Shilard's political games, and began repaying the debts the ambassador had incurred with a delicate assault on the envoy's personal inviolability. Then came the smashing of his face.
If Geralt chooses to rescue Anaïs La Valette or help Philippa Eilhart in chapter III:

The Nilfgaardian emissary's speech caused more confusion at the Loc Muinne summit than an attack by the Emperor's "Impera " brigade would have. If sowing chaos was the Empire's goal, then Fitz-Oesterlen discharged his duties exquisitely.

If Geralt chooses to rescue Triss in chapter III:

Shilard was to be the witcher's trump in recovering Triss. Unfortunately he turned out to have less value than either he or Geralt thought, a fact they learned when Renuald aep Matsen shot his countryman in cold blood. If anyone was more surprised than Geralt, it was – for a moment, anyway – Shilard Fitz-Oesterlen.

In the third and final installment of the trilogy, there is a gwent card that bears his image and name. Even if Triss was not saved by Geralt in the previous game, Fitz-Oesterlen does not appear, nor is he mentioned. 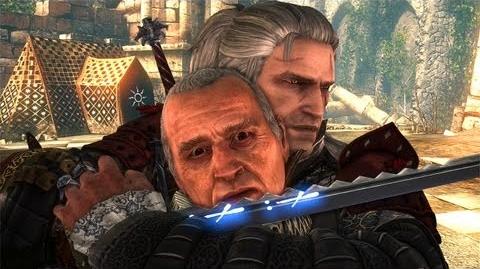 Shilard and Geralt on promotional screen from Enhanced Edition

Shilard and Baroness Louisa on screen from early version