Siegfried of Denesle was the 2nd Grandmaster of the Order of the Flaming Rose, serving from September 1270 to 1272.[2]

As a young knight, Siegfried joined the brotherhood to fight against monsters and generally anything evil that might endanger the common folk. Since he was also a nobleman of some moral code and kind heart, Siegfried got along rather well with the witcher Geralt of Rivia and their friendship changed his life forever.

Siegfried was born sometime in the 1250s to pious Sir Eyck of Denesle and his wife Sophia.[1] His parents raised him at Castle Denesle, teaching him knightly code of honor.

At one point, a serious illness struck Siegfried's mother. He immediately ran to his father and implored him to earn coin for her betterment by demanding payment for next few beasts he would slay. Eyck, however, refused so as to not stain his reputation. This angered Siegfried so much that he renounced his father.[1]

Later, when he joined the Order, a rumor began to circulate in the Trade Quarter of Vizima claiming he was secretly a bastard of Jacques de Aldersberg.[3]

Events in Vizima and uprising

Siegfried first met Geralt in the Vizima sewers while they were both on the hunt for a dangerous cockatrice. The knight suggested that they join forces to defeat the beast and deal with drowners. After the cockatrice was slain, both Geralt and Siegfried were ambushed on their way to the surface by Salamandra agents. After these were defeated, Siegfried sarcastically asked whether they were friends of the witcher's, then on a more sober note mentioned a friend who might be of service in defeating this organization: Raymond Maarloeve, a private detective living in the Temple Quarter just above the sewers.

Siegfried then spent most of the following days at his post (if he and Geralt joined forces in the sewers, this is the Order outpost north of the Cloister; if not, it is at the front entrance to St. Lebioda's Hospital), at one point making a brief excursion to the swamp - but first, he waited by the gate to the dike in order to help Geralt past its guards. He could also be invited to Shani's party. Later on, he was moved before the Cloister's main entrance and advised Geralt on a couple of happenings.

If Geralt has consistently supported the Order: Siegfried became a key ally to Geralt and started realizing that Jacques de Aldersberg is descending down a path of madness with mutated Greater brothers and other similar monstrosities designed to defeat both the Scoia'tael under Yaevinn and forces loyal to King Foltest.

If Geralt has consistently supported the Scoia'tael: Siegfried became yet another fanatic who blindingly believed in words of the Grand Master and considered the witcher to be traitor, becoming his sworn enemy.[3]

After the death of Grand Master Jacques de Aldersberg, the Order de facto lost its ground in Temeria and parts of Aedirn. The Order's Supreme Council convened not long after and Siegfried was chosen as the next Grand Master.[2] The assembly also accepted King Radovid V's proposal to become a special force of Redania and moved to that kingdom's northern parts where they began to build Castle Barienmurg, the main stronghold of territories granted to them as well as one of the largest fortifications in the Northern Kingdoms.

At this point, Siegfried still continued his monster hunting but due to an overload of work, he has done so sporadically. When summit of monarchs and mages was being prepared at Loc Muinne in July 1271, Radovid summoned Siegfried and his knights to oversee the security.

Iorweth's path: Siegfried stepped in to allow Geralt safe passage into Loc Muinne through the Order's Camp, though Iorweth nevertheless had to find an alternate route.

Roche's path: Siegfried vouched for both Geralt and Vernon Roche when entering Loc Muinne and meeting Radovid. Siegfried believed in Geralt's innocence regardless of the path the witcher has taken and also stated he owes Geralt too much to stand against him as well as talking about Radovid's ambition, the reformation of the Brotherhood of Sorcerers and the Order's view on peasant rebellions.

If Geralt decides to help Roche and then give Anais La Valette to Jan Natalis: Siegfried allowed them to depart in peace as opposed to ordering the Order's Knights to fight them.

If Geralt decides to give Anais to Radovid: He and his knights escorted them While Siegfried made a remark about how the Redanian colors would suit Roche.[4] 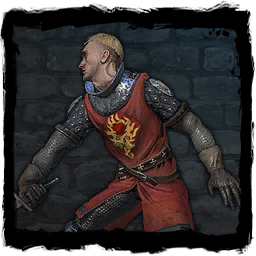 Siegfried of Denesle, a knight of the Order of the Flaming Rose, is an idealist who adheres to the Order's rules but is not devoid of common sense. Polite and open, he is unlike many of his brothers from the Order in that he is not prejudiced. He is undeniably courageous and demonstrated this when he descended alone into the sewers to fight the cockatrice.
Siegfried and I defeated the cockatrice together. The knight proved both polite and a skilled swordsman.
I have a feeling Siegfried is starting to see through his own misapprehensions. He has realized that killing monsters will not eliminate all the evil of this world, and his duties towards the Order sometimes force him to choose the greater of two evils.
During the bank robbery in the Trade Quarter, I opposed Yaevinn and his forces together with Siegfried. The attack reinforced the knight's conviction that the Order's dislike of non-humans is justified.
I asked Siegfried for military support during the assault on Salamandra's headquarters in Vizima. The knight, who was among those invited to Leuvaarden's party, agreed to help me break up the organization.
if Geralt does not side with Yaevinn in Force Recon:

The knights led by Siegfried defeated the Scoia'tael during the clash in the Golem Burial Ground.

if Geralt chooses the Order path:

On the hill under the Old Manor, during the fight against Salamandra, my friend aided me again.

if Geralt chooses the neutral path and decides to kill Siegfried.:

Siegfried of Denesle died by my hand when he stood between me and the Grand Master. He remained loyal to the Order of the Flaming Rose to the very end. 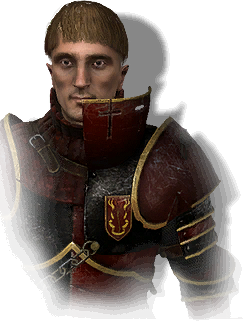 The knightly caste should oblige its members to follow the path of honor, of certain rules and ideals. Unfortunately in our rotten times, many among the knighted, dismissive of the vows they made, are often more interested in their own privileges and chances to stuff their pouches. Compared to all those false knights, robber barons and other heraldic rabble, the House of Denesle stood apart like a lion among mongrels. Like his father Eyck of Denesle before him, the young Siegfried always followed strict moral rules in life and an iron code of honor, to the point that his devotion sometimes bordered on fanaticism. During our last meeting, Siegfried had served in the ranks of the Order of the Flaming Rose, and he played no small part in the events at that time in the capital of Temeria.
If Geralt chose the Order in the first game:

It was because of those past times that Siegfried made no objections and allowed Geralt to enter Loc Muinne.

If Geralt decides to give Anais to John Natalis:

Their friendship proved its worth for a second time when Geralt and Roche faced a patrol sent to bring Anais La Valette under Radovid's protective wing. Because the Temerian and the witcher's interests differed from the king's, bloodshed seemed inevitable – yet, remembering their friendship, the knight of Denesle conveniently "forgot" that he saw them in the Kaedweni camp.