The Witcher: Of Flesh and Flame
Sirvat[1] was a son of Maliq Nibras and the crown prince of Ofir.

When he was visiting Redania incognito, the prince was cursed, transforming him into a giant toad. Years later, around 1272, he was killed in this form by an unsuspecting Geralt of Rivia.

The prince was visiting the Northern Kingdoms on a tour to learn as much as possible about the Continent before becoming a ruler. After arriving in Redania, he fell in love with a young noblewoman named Iris Bilewitz and her parents soon became very supportive of this union. Unfortunately, Iris was already in a relationship, with a recently impoverished nobleman Olgierd von Everec, who cursed the prince out of anger when Iris' parents intended to move forward with marrying off their daughter to Sirvat.

The cursed being then took to living in Oxenfurt sewers, where its venom gradually seeped into the city's waters, making many sick. By 1272 the situation got so bad the Royal Redanian Army had to temporarily shut the sewers down and began to investigate. At this time, Olgierd decided he grew bored of the prince's suffering. Instead of having someone try and lift the curse though, he hired the witcher Geralt to kill it, resulting in Geralt unknowingly killing the prince.[2] 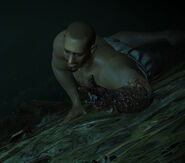 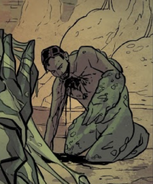 Sirvat in The Witcher: Of Flesh and Flame