Skjall was a Skellige warrior who lived in the village of Lofoten on Hindarsfjall with his mother and his sister, Astrid. One day, while he was gathering food along the shore, Ciri and the mysterious elf appeared out of nowhere, falling into the ocean near him. The elf carried a badly injured Ciri over to Skjall and asked for help, so Skjall took the two to Lofoten. He then took to watching over Ciri as she slept for almost a day while the elf went searching for a boat.

Once Ciri woke up, he informed her about the elf and how much time had passed before Astrid interrupted their conversation and, with Ciri desperate to get to the location the elf gave her, was sent off to ready a couple horses while Astrid took Ciri to the sauna to help her heal.

After Ciri finished up at the sauna and the two got ready to ride out, the Wild Hunt attacked the village and the two helped fight before making a run for the horses. Even though the villagers were in immediate danger, Skjall insisted on getting Ciri to the location to make sure she was safe before returning to the village. However, when he got Ciri to the elf, who was waiting with a boat, he watched as they appeared to argue before the elf used a spell to knock her out and get her on the boat. Seeing this, Skjall raced down to get to them but was knocked down from behind by the Wild Hunt as the boat left shore. Some time later, Skjall woke up long enough to see Uma before passing out once more.

When Geralt and Yennefer trace Ciri's steps to Lofoten, they learn that the elders, believing Skjall had fled the battle due to cowardliness, had branded him as Craven. To try and prove his worth and regain his name, he then set out to slay Morkvarg, but failed in this task and died from his wounds. Geralt finds his body and Yennefer reanimates it with the use of Necromancy in an attempt to learn what happened to Ciri on Skellige.

After Geralt is reunited with Ciri, she asks to return to Skellige to find Skjall's body and give him a proper burial so she can honor the young man that gave his life so she could live.

Ciri encountered plenty of liars, scoundrels and villains along her path - but luckily happened on some decent folk as well. Certainly worthy of being counted among the latter was Skjall, a young warrior from Lofoten. Initially, he and his family tended to Ciri's wounds, nursed her back to health, then he helped her flee the Wild Hunt. In doing so, he sacrificed the thing Skelligers hold dearest: his honor. Accused of cowardice, he was forced to perform a heroic deed to clear his name. Sadly, he failed. Mortally wounded by a beast in an abandoned garden, he suffered a slow, painful and lonely death.
Ciri could not restore Skjall's life or even clear his unjustly sullied reputation - but at least she was able to give him a proper burial. Skellige legend holds that Skjall's soul now dines with his ancestors in the Heavenly Feast Hall, where mead flows in torrents and the ballads never cease. Though my own nature does not tend towards the religious, I must admit I would very much like this to be true. 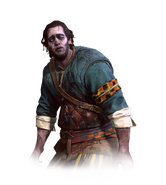 Version of Skjall in his reanimated state