Small Problems is an optional quest in Chapter IV which Geralt receives if he strikes up a conversation with the local mason, Harn, who is trying to repair the bridge to the Fields.

As Geralt is strolling through the area surrounding the village of Murky Waters, he comes upon a mason, Harn and his son, Pat, who are busily working on a bridge. It looks like they have just started. The witcher strikes up a conversation and it is not long before he learns that all is not as straightforward as it might appear.

It seems that the river is haunted by ghosts who have contacted the mason in his dreams and instructed him to fix the bridge which has fallen into disrepair. Not wanting to anger the spirits, he set himself to the task. But as hard as he works during the day, every night his work is destroyed and he must start anew in the morning.

Harn is convinced that the griggs who frolic around a small shrine, or santon, next to the bridge are responsible for the vandalism. He feels that they consider the bridge and the river to be their "turf" and this is their way of not too subtly "nudging" him out. He asks the witcher if he can help and of course our hero obliges. After all, even monster-slayers need steady income. The mason also adds that the local witch probably knows something about griggs and could offer some options.

So off Geralt goes to see the local witch, who is also the healer, and depending on his choices earlier in the game, might even be Abigail. Regardless, the healer tells him that the griggs require a peace offering in the form of a cat harness which was stolen from them by a rival band of griggs who live in the crypt in the fields. Cat harness? Yes indeed, it appears that griggs harness and ride cats in the same manner that humans harness and ride horses.

The witcher then heads off to the crypt to retrieve the object in question. The crypt is full of nasty beasts: alps, cemetaurs, alghouls, ghouls, fleders and garkains abound. There is even an ancient cemetaur who haunts the deepest, darkest corners of the crypt. So after much hacking and slashing, the witcher finds the santon of the "bad" griggs and retrieves the harness.

He then goes back to see the healer who instructs him to place the harness in the santon of the "good" griggs and wait for their counter-offer. He does as instructed and the griggs offer a four-leaf clover which Geralt in turn gives to the mason as a talisman against further vandalism. The mason is thrilled and offers the witcher three possible rewards: 400

, the book Specters, Wraiths, and the Damned, or his son's services as an archer during dangerous encounters in the area.

I need to go to the crypt in the fields. Inside, I'll find a santon belonging to a tribe of underground griggs. I need to find a cat harness there... The healer thinks it will be useful. I need to take a cat harness from the griggs that live in the crypt and return to the healer's hut.

I have the cat harness for the griggs. I can use it [to] conviince them that the mason has only good intentions. I have the harness that will win the griggs' favor. I should see the healer. (2000 XP)

I need to place the harness on the santon of the griggs who are annoying Harn. If the griggs are satisfied, they will leave me a token of their friendship. I have to leave the harness as an offering for the griggs by the bridge.

The griggs accepted my gift and left me a four-leaf clover in return. I should give it to Harn, who's sure to see it as a good omen. I must give the four-leaf clover to the mason. (2000 XP)

The mason can now continue working, though I doubt he'll finish the bridge anytime soon. Harn rewarded me for helping him. I have received my reward. (choice of reward + 4000 XP) 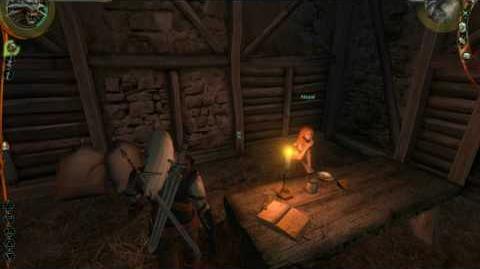