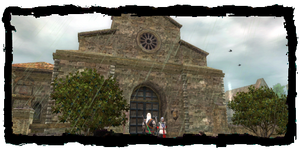 Saint Lebioda's hospital is one of the most prominent buildings in the Temple Quarter. It is bound to the north by Peddler Street, to the east, by Hospital Street and to the west by Heroes of the Guard Street. The grounds boast a lovely garden tended by the gardener, a former mercenary. It is also Shani's place of work.

If the guard at the entrance won't let you in the hospital, he will let you in with a bribe. He may accept a lower amount, but 50

is a safe number. Alternatively, after much hassle it is possible to prove Vincent Meis' innocence as a part of Suspect: Vincent Meis prior to entering the hospital, to get City Guard signet ring from him. With it, the guard won't bother Geralt. This "bribeless" way is much more plot choice dependent and is not a foolproof mean of entering the hospital, leaving bribery as the only viable option.

The hospital, named after the prophet Lebioda, was set up in a former temple of Melitele. To this day a triple-bodied statue of the goddess stands inside. Nurses and novices work there, trying to help those struck by the plague. It is not a pleasant place, filled with the moans of the suffering and the stench of their excretions. Those who do not survive the disease, meaning the overwhelming majority, are thrown into a pit behind the hospital. Every once in a while, the bodies are burned to prevent the plague from spreading. Recently the Order of the Flaming Rose placed the hospital under its protection.

the pit where the bodies are burned

Altar of Melitele in the hospital

Add a photo to this gallery
Retrieved from "https://witcher.fandom.com/wiki/St._Lebioda%27s_Hospital?oldid=515878"
Community content is available under CC-BY-SA unless otherwise noted.