Witcher Wiki
Register
Don't have an account?
Sign In
Advertisement
in: Creatures, The Witcher Chapter V, The Witcher Epilogue,
and 2 more
English

Edit
watch 07:29
'The Witcher' Lore: What is a striga?
Do you like this video?
Play Sound

King Foltest would sometimes tie criminals up to stakes in the ground, who would serve as a meal for the beast.

There is not much known about the curse that turns females into striga. The only well-documented example of a striga's lifetime was that of Adda the White, daughter of Foltest, king of Temeria. She was cursed prior to her birth, then born a striga. She and her mother, who did not survive the birth, were laid to rest in a single tomb. For seven years she grew inside the sarcophagus, only to emerge a creature of predatory instinct with the size and skill to carry it out.

Some details of the curse which transforms people into strigas are outlined in Ostrit's journal.

In order to lift the curse on a striga, "someone must prevent the striga from returning to her coffin by the third crowing of the rooster. Then she would be cured, turning into an ordinary little girl".

Life After the Curse[]

After a person has been cured from the striga-curse, there is the chance that the person will not fully recover mentally, keeping part of the vicious and somewhat dull-witted nature of her previous striga-form. However, there is also the implication that this is specific to Adda's case; being cursed before birth, she would have no exposure to humanity and thus had to learn speech, proper behavior, etc. at a much older age than normal.

There is also the chance of a relapse, turning back into a striga. To prevent this, "cured" strigas wear sapphire amulets and participate in rituals designed to ward off the curse.

A striga may tolerate necrophages; she needs a hideout during the day, often choosing a sarcophagus in a forgotten branch of a crypt

Sensitive to silver; a striga may be freed from her curse by those who survive a night near her sarcophagus

A striga is a very strong and agile creature, but not as resilient as she might seem; she attacks by surprise and tries to tear opponents to pieces without giving them a chance to fight back; near her sarcophagus, a striga is always stronger. The striga attacks use the blinding critical effect.

Striga heart
The striga is the first monster introduced in the opening cinematic sequence of the game. It depicts the tale of the night Geralt cured Adda's curse.

"Where does it come from? Spells, magic?"
"I have no idea, sire. The Sages research these phenomena. For us witchers, it is enough to know that strong will may create them. We also like to know how to fight them."
"And kill them?"
"Most frequently, yes. That is what we are usually paid for. Few want the spell lifted. People usually just want to be protected. If the monster has killed people, revenge may be another motive."

Developer CD PROJEKT RED's characterization of the striga taken from the monsterbook, which was enclosed with the Collectors Edition of the computer game The Witcher for Poland, Hungary and the Czech Republic:

Geralt of Rivia made his first appearance in a story titled simply "The Witcher". His task there was to lift the curse holding Princess Adda, who was born a striga. This seemingly simple story of a contract for a professional monster slayer proved to be a fascinating tale of jealousy and hatred. No wonder Geralt's literary debut served as the basis for the film that opens the game.

The striga also had to appear in the game itself. Initial ideas called for it to be the result of Salamandra's experiments, but we ultimately decided it would once more be Adda, possessed by a recurrence of the curse.

The concept for the striga follows faithfully its literary description. A foul, well-muscled monster, the cursed princess runs about on all fours. Her jaw extends from ear to ear, and her fingers end in claws capable of tearing a man to shreds. Her breasts and red hair are the sole reminders that the striga is, in fact, a young girl possessed by an evil curse.

In the cinematic that introduces the game, the striga is deadly, aggressive, and bursting with hatred. At one point the beast begins to fear Geralt and for a moment behaves not unlike a little girl. Presenting the storm of emotions with which the creature grapples would have been impossible without an array of animations and facial expressions.

What is a Striga? - Witcher Lore and Mythology - Witcher Striga? 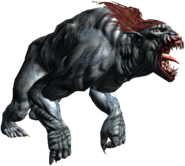 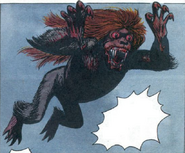 Striga as appeared in the Witcher comics