A succubus (female) or incubus (male) is a creature, sometimes considered "a demon", looking like a highly attractive human being seducing real humans, first appearing in dreams from time to time, then physically, and is interested only in men that have already come of age. Neither succubi nor incubi are particularly violent, though they draw energy from the men and women to sustain themselves, often until the point of exhaustion or death of the victim.[1]

Try to live close to their "prey", near towns and villages. Some succubi inhabit cities.

Again?! Good grief, woman, I'm spent...
– Lester of Smallton to a succubus, a few days before taking a vow of celibacy
Unlike other monsters, succubi and menads feel no desire to kill, do not crave human blood and usually do not, in fact, mean any harm at all. They are motivated by one thing and one thing only: an insatiable lust. They try in vain to slake this by engaging in sexual acts with any other humanoid species they encounter. While it must be admitted that their "victims" rarely put up much resistance, this does not mean succubi and menads do not present any danger: their never-ending advances, though pleasurable at first, have pushed more than one man to madness or even death.
Succubi and menads usually can be found near human settlement, including small villages and populous cities. They prowl at night, though when stricken by serious need they will leave their lairs during the day as well. They shower their affections on men as well as women, the young as well as the old, the ugly as well as the beautiful. Some of them are particularly fond of pastors and other holy men, whose seduction they treat as a sort of game.
Though succubi are peaceful by nature, when forced to fight they will defend themselves fiercely. One should thus not be fooled by their fair appearance – under the velvety skin of their arms lie muscles of iron, and a blow delivered with their rear, goat-like legs or the thick horns on their head can easily crush bone.

Clever witchers may be able to talk down a succubus, with stories of witchers seducing a succubus and allowing them to flee a region whispered among commoners. Should a witcher choose to slay a succubus, they must act quickly. Succubi are known for their surprising brute strength.

They can also be accomplished spell-slingers in their own right, commanding fire with natural aptitude. The simple flashes of fire that a succubus can call upon can disrupt any sword technique a witcher is capable of, and there is no defense save for Quen, or frantic rolls away from the flames.

Relentlessness is key. A succubus cannot be allowed to control a battle. Explosive bolts or Aard can disrupt their spell-weaving, Northern Wind can freeze them in place. A witcher will succeed in slaying a succubus if they can pin them down and unleash a flurry of silver sword strikes.

Vara and her wings. 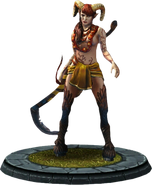 The succubus render in The Witcher Battle Arena

The succubus of Vergen, in The Witcher 2. 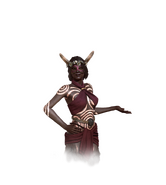