On the western side of Lake Vizima

The Witcher
The swamp, also known as the "swamp forest", is populated (at least temporarily) by a village of brickmakers, an old recluse, a group of druids who live in a beautiful grove, a visiting dryad, several lumberjacks, a hidden camp of Scoia'tael and (of course) a host of beasts and monsters. There is also a tower in the middle of the area, which seems to breed creatures...

Across the lake from Vizima lies a large area of marshlands which is home to small human communities, but also to various monsters. It is not safe there, even during the day — a drowner or a bloedzuiger can spring from the murky water at any moment. The casual traveler should also be mindful of the misleading will-o'-the-wisps, which have a tendency to lure unwary adventurers further and further into the swamp, until they become mired in mud and perish. To reach the swamp, one must hire a ferryman at the Dike in Vizima and take the boat across the lake.
A group of lumberjacks works deep within the marshlands, making money by selling lumber to Viziman craftsmen. They are lead[sic] by a dwarf named Yaren Bolt, who rules the small community with an iron fist.
The swamp is home to brickmakers who make their living excavating and firing clay. Theirs is a small, secluded village, where life proceeds at its own pace. A somewhat crazed woman named Vaska leads them.
The swamp is a place where man must bow before Nature in all its wild, tangled grandeur. That is why the druids have settled there, establishing a sacred grove with the tree of life at its center. The disciples of Nature allow no violence within the grove, where they tend to sick animals, even taking in wounded dryads.
The misty marshes hide many secrets. For example, there is a small clearing where statues of powerful golems are half-buried in the mud as if frozen mid-step. One of them is particularly unsettling, towering ominously over the clearing 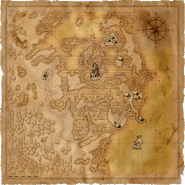 Map of the Swamp 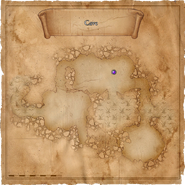