Witcher Wiki
Register
Don't have an account?
Sign In
Advertisement
in: The Witcher Chapter V, The Witcher quests
English

Hope Burns Bright
The Flame that Cleanses
Under a Fiery Sky

q5001_secrets
Sweet Revenge is a quest given to Geralt by either Dandelion in Chapter IV right before the departure to Old Vizima, or King Foltest in Chapter V. It is the culmination of Geralt's quest to eradicate Salamandra and takes the witcher to the Old Manor.

This quest actually begins much earlier in Chapter V, but the action only really starts after we find our hero emerging from the Striga's crypt, having earlier been locked in by Velerad. The two men have a little exchange in which the witcher "thanks" the burgomeister for that little surprise, but then they get down to business. Geralt may or may not have killed the striga (his choice) but that has little impact on what follows.

Geralt saved Adda: Velerad rewards the witcher with D'yaebl, a nice steel sword, but possibly not as nice as the one Geralt is already carrying at that point.
Geralt killed the striga: no sword, and no more interaction with the Princess or striga, since she is dead.

Velerad then tells Geralt that the King has a message for him: "To cure the 'disease', go to the old manor". That is pretty clear. So, it is off to the old manor to finally confront Azar Javed and put an end to Salamandra once and for all.

Upon entering the area, Geralt meets de Wett and a handful of knights of the Order. The two speak and de Wett slips up when the witcher mentions having found a diary in the crypt. The count stupidly refers to the diary as Ostrit's diary. Not being one to let details like these slip by unnoticed, Geralt calls de Wett out on this little slip of the tongue. The Count, rather than back-pedalling, admits that he knew all about Adda's curse. He also suggests that he is actually just using Salamandra to achieve his own goals. He goes so far as to invite the witcher to join him, promising rich rewards. But our hero is steadfast and will have none of it. Naturally this can only be settled with a duel.

One duel, one dead Nilfgaardian count and a handful of Order corpses later, Geralt is on his way to the old manor proper. A few more obstacles throw themselves in his path, however. There is, of course, the usual complement of drowners, drowned dead, bloedzuigers, and Dagon worshippers, but after deftly navigating those, our hero continues climbing the hill towards the manor. When he reaches the ruined village, he comes upon Azar Javed, with Rayla! But it is no longer truly White Rayla, she has obviously been subjected to the dreaded Salamandra experiments and is now just an "enslaved bag of blood and muscles", albeit pretty well armed and capable (she can now blind opponents). 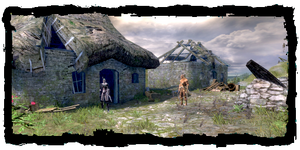 Azar does his usual taunting and disappearing act, leaving his newest "perfect creation" to deal with the witcher. Good thing the mage reanimated Rayla, since he can no longer rely on the Professor to fight his battles for him! Needless to say, the witcher does what he does best and puts Rayla to rest, finally and permanently. Then he presses onward toward his goal.

Beyond the ruined village is where the action really begins to heat up. Within the courtyard of the manor, Geralt can see his allies busily fighting a large number of Salamandra and these guys are of the mutated variety. There are armored hounds, mutants, mutant assassins, and greater mutants.

It is Yaevinn and a band of elves and dwarves who are fighting in the courtyard.

It is Siegfried and some knights of the Order.

Not one to let his friends fight alone, the witcher joins in the action. But once that threat has been eliminated, our hero must continue and somehow enter the catacombs beneath the old manor. Again, his ally proves useful.

Yaevinn tells him about a well shaft that he can squeeze through to enter the catacombs.

Siegfried tells him about a cave, once inside he only needs to go straight until he finds a small passage.

Triss has procured a key to the door.

Each entrance leaves the witcher at a different starting point in the catacombs (see the map below), but the destination remains the same: Javed's laboratory.

Geralt then fights his way through the catacombs, meeting Javed twice more and twice more the sorcerer tries to leave the witcher to his minions while fleeing. The first encounter has Javed leaving our hero to face a koshchey he has conjured, assuming, wrongly once again - when will this guy learn? - that the beast will make quick work of Geralt. No such luck. The second encounter features two "greater brothers", but they are no more successful at stopping the witcher than the koshchey was. There is no time to savour the victory, however as our hero is immediately teleported, courtesy of Azar to a new destination: Javed's lab.

It is time for the final confrontation! There is the usual grandiose evil overlord speech, complete with the standard evil overlord miscalculations and then it is down to business.

If Geralt spared Berengar in Chapter IV: Berengar faithfully shows up with every intention of helping Geralt, but sadly his skills appear to be rustier than he bargained for.
If Geralt killed Berengar: Javed suddenly notices that Geralt happens to be wearing not only his own medallion, but Berengar's as well. The mage comments that "even with the medallion" the witcher has no chance.

Ha! Good-bye Azar! But wait. It is not over yet. Geralt barely has time to check Javed's body for loot, I mean the stolen Witchers' secrets, when he hears a vaguely familiar voice calling the now deceased mage. It is the Grand Master via telecommunicator! How very interesting. This can mean only one thing. It seems Javed was not the mastermind after all, it was Jacques de Aldersberg all along. That explains why Javed did not have the secrets on his person, nor anywhere in the lab. The Grand Master has them. The witcher vows then and there to find the Grand Master and really finish things. 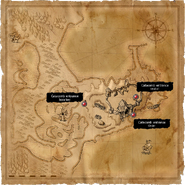 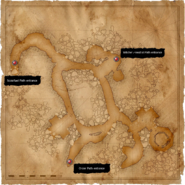 Foltest wants me to deal with the Salamandra - once and for all. I hope the king proves a trustworthy ally. I must dismantle Salamandra at the behest of the king himself.

Zoltan said he and the remaining refugees would hide in the druids' cave in the swamp. I need to press forward. I need to go on. (3000 XP)

Siegfried has joined the Grand Master and returned to Vizima. I must press on. I must go on. (3000 XP)

Shani said she would hide in the druids' cave in the swamp and help the refugees. I must press on. I have to go on. (3000 XP)

The Death of De Wett[]

I came across Salamanders and some mutated hounds in the Old Manor. I must be nearing my goal. I must be getting close.

Yaevinn will lead me to the entrance of the catacombs. I must follow him. I should follow Yaevinn. (3000 XP)

Siegfried knows of an entrance to the catacombs beneath the Old Manor and will lead me there. I need to follow him. I must follow Siegfried. (3000 XP)

Triss knows of an entrance to the catacombs beneath the Old Manor and decided to lead me there. I need to follow her. I must follow Triss. (3000 XP)

Yaevinn decided to make a stand by the entrance, to face the enemy there. He nearly forced me to descend. I must hurry so his sacrifice is not in vain. I must descend and deal with Salamandra - once and for all.

Siegfried is making a stand by the entrance, facing they enemy there. He nearly forced me to descend. I must hurry so his sacrifice is not in vain. I must descend and deal with Salamandra - once and for all.

Triss decided to make a stand by the entrance, face the enemy there. She nearly forced me to descend. I need to hurry so her sacrifice is not in vain. I must descend and deal with Salamandra - once and for all.

I killed Azar Javed, the leader of Salamandra. The hydra has lost its head, the criminal organization has ceased to exist. I should search this chamber thoroughly, recover the stolen witchers' secrets. I must search this laboratory thoroughly. (3000 XP)

I couldn't find the witchers' secrets, but that hardly brings my search to an end. I must warn the king of the Grand Master's intentions. He may have stolen the secrets.

Yaevinn has arranged transport to the Temple Quarter. We're to meet at the landing, where a boat awaits us. I must warn the king. Yaevinn awaits at the landing with a boat that will take us to Vizima.

Siegfried has arranged transport to the Temple Quarter. We're to meet at the landing, where a boat awaits us. I must warn the king. Siegfried awaits at the landing with a boat that will take us to Vizima.

Triss has arranged transport to the Temple Quarter. We're to meet at the landing, where a boat awaits us. I must warn the king. Triss awaits at the landing with a boat that will take us to Vizima. 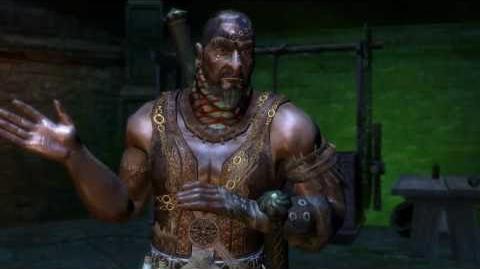