The Last Wish
Blood of Elves
Sword of Destiny (Polish: Miecz przeznaczenia) is the second book in Andrzej Sapkowski's The Witcher series in terms of story chronology, although the original Polish edition was published in 1992, before The Last Wish (but after the Wiedźmin short story collection made obsolete by The Last Wish). Some of the individual short stories were first published in the Fantastyka magazine.

Both English publishers decided to skip Sword of Destiny and publish Blood of Elves (the first novel in the saga) directly after The Last Wish, even though the short stories in this collection take place earlier and introduce some of the characters that become major characters in the novels.

The UK edition was subsequently published by Gollancz on 21 May 2015 and the U.S. edition was released by Orbit on 1 December 2015. Gollancz later released a second edition on 10 March 2016.

There are two audio versions available in Polish. Classic audiobook, lasting about 13 hours and read by Roch Siemianowski, was released by superNOWA (Polish publisher of Sapkowski's works) in 1990s.

In 2011, after huge success of audio play based on Sapkowski's Narrenturm, Fonopolis and audioteka.pl released audio plays based on The Last Wish and Sword of Destiny. The latter, lasting about 15 hours, was voiced by 49 actors, including Krzysztof Banaszyk (Vernon Roche in Assassins of Kings) as Geralt, Anna Dereszowska as Yennefer, Sławimir Pacek (minor characters in video games) as Dandelion, Joanna Pach (minor characters in video games) as Ciri, Wiktor Zborowski (famous Polish actor) as Istredd and Krzysztof Gosztyła as narrator. Samples from all short stories can be found on audioteka.pl's site. 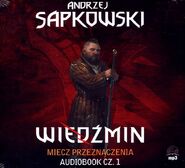 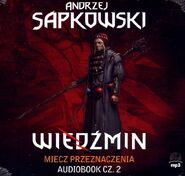