View source
watch 10:03
What Are Sylvans - 'Witcher' Lore
Do you like this video?
Play Sound

Sylvans, called willowers or pucks,[N 1] and labeled superstitiously as devils (archaic Common: deovel; Elder Speech: d'yaebl; Dwarvish: duvvel), are are an exceptionally rare, intelligent race native to the woodlands of the Northern Kingdoms. They are distinguished by prominent goat-like visage and delight in pranks, feasting, and music.

Sporadically, sylvan may also be referred to as a "faun".[N 2]

Sylvans resemble a human with goat's horns, soft lips with yellow, horse-like teeth, and a goatee. Their lower body features a tasseled tail and hairy legs with cloven hooves. The horns earned sylvans the label of "devils", which they dislike,[1] and occasionally cause confusion with the beastly chorts for humans who have never seen the latter.[2] Their voice resembles goat's bleating.[1] Their life-spans reached up to more than 100 years.[2]

Though miles away apart in behavior, sylvans are related to the Aen Seidhe with whom they share the blood of the Elder Race.[4] It's therefore unsurprising that many sylvans are quite familiar with elven defenses[5] and that the two peoples have no difficulty to cooperate.[1][2] Some scholars include sylvans among the so-called sapient monsters.[6]

Most sylvans are merry, enjoying tricks and riddles more than anything else. They also love music and are quite apt at playing reed pipes. Mischief aside, they can be helpful by fertilizing fields, scaring birds away, voluntarily watching over turnips, and eating caterpillars. Their diet is largely herbivorous.[1] However, they can also become very comfortable and spend days in idleness, puffing on pipes, overeating, and downing stiff drinks.[2]

As for magical prowess, many sylvans can learn mental spells.[4] Others, it seems, found a way to breathe fire in combat.[2]

Dryads, with whom they live in Brokilon,[7] value sylvans as lovers guaranteeing a vigorous daughter. In theory, sylvans may procreate with elves and humans but this doesn't occur.[4] Indeed, fauns bedding nymphs are a popular motif in art[1] and sculpture.[8]

Sylvans are cruel, greedy and treacherous. Still, I prefer them to dh'oine.
– Yaevinn, legendary Scoia'tael commander
Sylvans and Yakshas, a kindred species, are extremely rare woodland creatures whose appearance combines traits of goats and rotund men. These beings usually pose little danger, for they limit their contact with humans to playing harmless (though often bothersome) tricks and eating crops from their fields.

Melee combat against a sylvan is difficult, even for a witcher. One has to evade the physical strikes from a sylvan, not attempt to parry or counterattack. Yrden can gain time to bring a silver sword into play, but a sylvan can counter this by breathing intense flames that melt through the best armor. If close-quarters combat isn't going well, one should be prepared to make use of long-ranged options. A crossbow loaded with good bolts can keep the witcher relatively safe, whilst being effective. 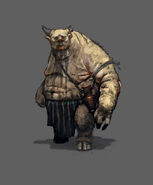 Corpulent sylvan with one horn broken.