View source
watch 09:32
Witcher Lore: The History Of Temeria
Do you like this video?
Play Sound

After the first and second wars, Temeria profited the most out of the defeat of Nilfgaard, expanding its borders as far south as Angren and Riverdell, reaching the Amell mountains. But the Kingdom also received a heavy blow regarding its economy, which forced it to buy goods from their southern neighbor.

In 1263, during the First Northern War, King Foltest of Temeria sent the Temerian Army to Lower Sodden, in an attempt to help defend against the invading Nilfgaardians. While the Nilfgaardians were defeated, Temeria received many refugees from nearby Cintra, after its capital was sacked.[1]

After the war, tensions grew with Redania, as well as Nilfgaard, and an influx of cheap Nilfgaardian goods started passing through Temeria, damaging the economy. King Vizimir II of Redania forced Novigrad into ius stapulae, blocking Temerian and Nilfgaardian goods from entering the city. In response, Foltest issued the law in Vizima and Gors Velen, in an attempt to re-stabilize the economy.[1]

In early 1267, on the brink of a Second Northern War, Foltest issued messages to his lords and vassals, instructing them to collect troops for the army, and to store supplies and fortify their castles, prepared for the possibility of sieges in the coming conflict.[1]

Temerians are considered very polite and religious, but do not fully accept representatives of the so-called Elder Races. In general Temeria's residents have a tendency for xenophobia, despite nonhumans living in their society.

The most popular and most widespread religion in the kingdom is the worship of the goddess Melitele, though cults of the Prophet Lebioda and Kreve also have their followers. On Saovine, children burn figurines of Falka, to represent her defeated rebellion.[2]

Temeria is one of the wealthiest realms in the North. Temerian economy is based on cultivating the production of various goods, trade, and extracting valuable mineral resources, from the mountains of Mahakam. The Temerian oren is one of the most used currencies in the world. Temeria also remains a land with highly developed agriculture, animal husbandry, and food industry. As Mahakam is officially part of the kingdom, Temeria has considerable interests in the extraction of precious metals and the production of high-quality weapons.

In the kingdom of Temeria's former coat of arms ... there was a lion passant. But the Temerian royal dukes used a different one ... containing three lilies. Since in heraldic symbolism the lily fower is a sign of the successor to the throne, the royal son, the heir to the throne and sceptre ...

And when Prince Goidemar, the son of old King Gardik, went to fight against the insurgents of the she-devil Falka, the Temerian Army, under his standard, under the emblem of the lily, fought and won decisive victories. And when Goidemar inherited the throne from his father, he established three lilies argent on a field sable as the kingdom's coat of arms as a memento of those victories and for the miraculous escape of his wife and children from the hands of the enemy. And later King Cedric changed the state coat of arms by a special decree so that it's a black shield aspersed with silver lilies. And the Temerian coat of arms has been like that ever since.

- Jarre, The Lady of the Lake

The following illustrations have been created by Wiki editors basing on official description and/or depictions.

The first historical coat of arms

The following illustrations have been used in CD Projekt's The Witcher franchise. 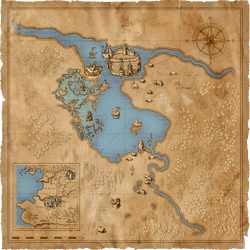 The prologue is set at Kaer Morhen, which is in Kaedwen, not Temeria, and the following chapters are all set in or around Vizima. You are not free to travel around Temeria as you wish, as the available locations change with each chapter. There is no way to travel large distances to reach other familiar locations in the game world.

Nevertheless, there is a world map in the game, and examining it gives a sneak peek at locations that might come into play in the future.

At the bottom left of the map, a cut-out can be seen which depicts the Northern Kingdoms.

"Temeria's population is not exclusively human. It also includes dwarves, elves, gnomes and dryads. After the devastating war with Nilfgaard, many areas are haunted by monsters, which have hitherto not constituted a serious threat, while the realm's roads are made unsafe by outlaws and common bandits. As a result, the witcher profession is once again in demand, though people continue to treat witchers with caution and disdain, often calling them mutants and freaks.
The Kingdom of Temeria has silver lilies on a black background as its emblem. This powerful country has gained ever more influence in recent years under the wise rule of King Foltest. Across the Pontar River, the kingdom borders Redania. To the south and east it is hemmed in by mountain ranges, including Mahakam, the mainstay of dwarves and gnomes, past which lie the lands of Lyria and Aedirn. The capital of Temeria is Vizima, lying on the shore of Lake Vizima. The second largest city is Maribor. Temeria mints its own coin — the oren. The most widespread religions are the Cult of Melitele and the belief in the Eternal Fire. Temeria is home to the headquarters and many commandeers of the Order of the Flaming Rose."

There is armor in the second game for Geralt called Temerian armor.

Temeria
Anyone who wishes to be considered an educated man rather than a common boor should mention Temeria first where the Northern Kingdoms are concerned. The realm's coat of arms is a black shield dotted with silver fleurs-de-lys, and its capital is Vizima, where the Royal Palace erected by King Foltest stands. The country extends its protection to several surrounding domains, including the mountainous dwarven homeland of Mahakam. Currently Temeria's neighbors include the mighty Redania, the wooded Kaedwen, and Cidaris, known for the truly pathetic poetry of Valdo Marx, a troubadour unworthy of the title, for he chiefly devotes himself to besmirching the work of other, superior artists. Two other places in Temeria are essential to our story and thus must be mentioned. Firstly, north of Vizima, near the White Bridge that links the banks of the Pontar, stands the proud fortress and walled town of the La Valette family. Secondly, further up the Pontar lies the small river port and trading post of Flotsam. Both will prove important to the beginning of our story...