The Temerian Army is the ground force of Temeria, forming its largest military component.

During its turbulent history, Temerian soldiers had crossed their weapons with many foes however mostly with the Royal Redanian Army, due to a rivalry between the two monarchies.[1][2][3] Its core consisted of infantry units from cities like Vizima and Maribor as well as cold-blooded professional Landsknechts, whom cavalry could not frighten.[4] Although generic foot soldiers usually drafted from villages and cities during times of war were in highest number, a goodly number of knights and influential nobles like Count Daniel Etcheverry of Garramone served in the army, often leading detachments.

Gathered under black flags aspersed with silver lilies, they also fought in Northern Wars. During the huge Battle of Brenna, 12 thousand brave Temerian and Redanian infantrymen formed the heart of Northern Kingdoms' might.[4]

Around 1228, under the reign of King Medell, the army invaded Aedirn, and were soundly defeated in the fields at Hagge.[3]

In 1263, during the First Northern War, the Temerian Army, along with the forces of Aedirn, Redania, and Kaedwen, faced the invading Nilfgaardian Army in Lower Sodden, during the Battle of Sodden Hill. The northern armies were under the united leadership of King Vizimir II of Redania, and were successful in halting the Nilfgaardian invasion.[3]

Due to Cintra's fall in the war, King Foltest not only accepted Cintran refugees but also allowed them to create voluntary troops that numbered around eight thousand, with golden lions on azure flags, led by Marshal Vissegerd.[6] Around the same time, the Scoia'tael were formed and the army lost many soldiers to attacks from the nonhumans throughout the following years.[3]

In early 1267, after Foltest met with the other northern rulers at Hagge about the tension with Nilfgaard, he returned to Vizima and messaged his vassals, instructing them to collect troops for the coming conflict, bolstering the army to a considerable size.[3] Readying an armada, Foltest ordered mass forests be cut down, his quartermasters and boat-smiths working vigilantly to use the wood for crafting ships, and then began launching them on the west coast of Sodden and Brugge, in embarkation and disembarkation drills.[7] 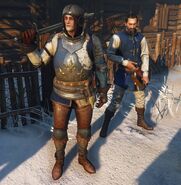