4013_succubus
Temptation is an optional quest in Chapter IV which forces the witcher to examine his own opinion on extra-marital affairs and the value of a promise.

As he is taking in the sights of the village of Murky Waters, Geralt is suddenly overcome by the powerful aroma of something good cooking and it seems to be emanating from the Blacksmith's house. It seems that the blacksmith recently killed a pig and his wife is now making a lovely stew with the meat. The witcher enters the house.

The blacksmith's wife is inside and greets him warmly. She notices that the witcher is rather thin and offers him some food which he gladly accepts. She then asks him if his services are available for hire, which of course they are.

It seems that her husband has taken up with a succubus and she can no longer tolerate the affair. She asks the witcher to collect nine portions of shimmering dust with which she plans to make an amulet which will ward off the succubus and put an end to the extra-marital activities. The witcher agrees and she offers him a herbarium as a reward.

He then leaves, intent on getting down to business when he is accosted by the blacksmith who has overheard the conversation. He makes a counter-proposal: the witcher should gather for him nine portions of shadow dust with which he could make a different potion which would merely put the succubus to sleep until the whole situation has blown over. Then the blacksmith could pick up where he left off with his "bit on the side" and his wife would be none the wiser. The blacksmith offers a choice of reward: a piece of red meteorite ore or 500

Geralt must choose with whom he wants to side. Should he keep the agreement he made with the wife, or switch his allegiance to her husband and help him?

The blacksmith's wife asked me to get rid of the succubus who haunts her husband. I need to kill nine noonwraiths in the field and collect shimmering dust from their hair. The smith's wife can use that dust. I should venture out into the fields and return with nine handfuls of shimmering dust collected from the hair of noonwraiths.

Wife's path: I gave the dust to the blacksmith's wife as agreed. In exchange, she gave me a herbarium. I have received my reward. (

Blacksmith's path: I have the shadow dust for the blacksmith. I should deliver it, but I'm still considering his wife's offer...

Money: The blacksmith rewarded me for my services. I hope his wife never learns about our little deal... I have received my reward. (500

Meteorite: The blacksmith rewarded me for my services. I hope his wife never learns about our little deal... I have received my reward. ( 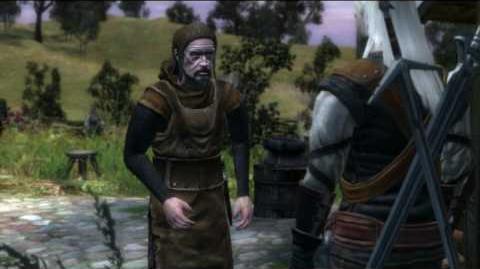 Blacksmith Temptation
Add a photo to this gallery
Retrieved from "https://witcher.fandom.com/wiki/Temptation?oldid=523781"
Community content is available under CC-BY-SA unless otherwise noted.