Spymaster
When in cover:

Bernard Ducat, better known as Thaler, was a master spy and the former head of Temeria's Intelligence Service during the 1270s.

Sometime prior to 1270, Thaler was already the head of Temerian Intelligence, where he helped with various spy activities as well as more unusual tasks, such as sending some of his men out to hunt down catoblepas for their meat, as it was Adda the White's favorite dish.

During this time a young Shani happened to be in Vizima and, taking a liking to her, Thaler asked her out, but hid who he really was. However, one night while they wandered the city, Shani noticed two spies following them and eventually the inept men accidentally revealed that Thaler was, in fact, the head of Temerian Intelligence, ending their short relationship.

Eventually in 1270, Thaler began to pose as a fence in the city to gather intel and was visited by Coleman, who sold him some witcher equipment he'd found. Thaler eventually sold this off to the guards, not realizing it'd soon lead to him crossing paths with the witcher Geralt, who was also looking for the owner of the sword. During this time, King Foltest also left the city for a bit and personally put Thaler in charge while he was away.

Shortly after, Geralt visited and, after Thaler revealed what he knew about Berengar, the two parted ways only to meet up again later during an important reception for high class society. However, this time Thaler was now using his real identity, Bernard, and revealed to Geralt who he really was. He eventually asked a favor for a favor and had Geralt retrieve a mysterious letter, not revealing he believed someone was forging documents as Foltest. With the newest letter in hand though he was finally able to confirm it, as the letter was supposedly from Foltest stripping Thaler of his position as chief but was missing the king's signature.

As the party winded down, Thaler went outside but soon got into an argument with Roderick de Wett, and while the count remarked Thaler was just mad about being fired, Thaler noted de Wett knew more than he was letting on.

If Geralt defends Thaler: Thanks to the witcher stepping in, Thaler was saved from being killed by de Wett and his men. He then asked Geralt to meet him back in the inn to talk and Thaler revealed all the evidence he'd gathered on the forged documents.

If Geralt kills him or walks away: With no one else to protect him and outnumbered, Thaler was quickly killed. Game continuation: Note that this is one of the few times in the games where your choice has no effect and Thaler will appear alive in the third game, even if killed here and you imported saves all the way through.

After Nilfgaard invaded Temeria in late 1271, they quickly dismantled the kingdom's secret service and Thaler barely escaped with his life. Not knowing what else to do, he proceeded to drink away his sorrows until his "liver screamed bloody murder" then decided he had to do something about the situation. Shortly thereafter he got into contact with Vernon Roche and Sigismund Dijkstra and the three decided something extremely drastic had to be done: King Radovid V of Redania had to die.

Using his experience as Temeria's former spymaster, he began to recruit new spies and took on the role of a traveling cobbler by the name of Clogs, noting that cobblers didn't attract any attention while still being able to see and hear all the people around them while they worked.

If Geralt takes part in A Deadly Plot: While relatively safe from being harassed by soldiers, Thaler found himself instead attacked by a group of rock trolls who wanted shoes of their own. Geralt eventually found and extracted Thaler from them and Thaler made it safely to the Seven Cats Inn.

If Geralt takes part in Reason of State: He later met up with his co-conspirators to tell them of the information they'd been waiting to hear about and included Geralt in on their plans, who was needed to lure Radovid off his ship and into an ambush. As Thaler and Dijkstra weren't very adept fighters like Geralt, Vernon, and Ves, he and Dijkstra remained at the butcher's yard in Novigrad to wait on the outcome of the attempted assassination.

If Geralt protects the Temerian patriots: Thanks to Geralt, Thaler survived Dijkstra's betrayal and was able to continue negotiations with Nilfgaard for Temeria to become a vassal state to the Empire and made plans to return to Vizima once Emhyr cleared out.
If Geralt lets Dijkstra kill the Temerian patriots: Unfortunately Thaler didn't foresee Redania's former spymaster turning on them and was subsequently killed with Vernon and Ves.

During Chapter II, Thaler can be found in his house and sometimes walking around through the streets of the Temple Quarter. His house doubles as his shop, in the southeastern section of the Temple Quarter, just around the corner from the dungeon. There he can be called upon to buy and sell a variety of goods. He also plays dice and offers a quiet drinking atmosphere and a free place to stay.

Thaler will buy and sell:

In the Temple Quarter of Vizima lives a fence named Thaler. He has many things that belonged to Berengar, and also deals in illegal goods. The fence is a repulsive man and uses particularly foul language.
During the day he can be found in his store, which is located in a house in the Temple Quarter.
Thaler put Berengar's witcher equipment up for sale. I wonder how he acquired these things.
The fence's circle of influence is really wide. It also includes city guards.
For a fence and a thug Thaler has surprisingly extensive contracts, not only with thieves, but also among the affluent.
There was a lot of circumstantial evidence suggesting that Thaler was working for Salamandra, yet he proved to be innocent.
To my surprise Thaler the fence was invited to Leuvaarden's reception, at which only the rich and influential were present.
It turned out that Thaler is the chief of Temerian intelligence and his fence guise is simply one of many assumed personalities.
If Geralt stays neutral when Count de Wett and Thaler are in the courtyard:

When Count de Wett accused Thaler of treason, I did not object. The former head of Temeria's Intelligence Service was summarily executed.

If Geralt defends Thaler from Count de Wett in the courtyard:

not actually in the game:

I met Thaler again in the chambers of the royal castle. Foltest seems to be satisfied with the doings of his master spy, and Thaler is pleased with our collaboration.

Geralt was not expecting to meet Bernard Ducat, former head of Temerian intelligence, in such circumstances. Their relationship went back a long ways, to the time when Ducat was leading an espionage operation in the Vizima Temple District disguised as a fence named Thaler. Thaler the fence was known for his gruff manners and extremely filthy tongue.
Much had changed since those days, but Clogs the cobbler (as Ducat now called himself) was as rude and vulgar as Thaler had ever been.
His exact role in the attack on Radovid was not clear, but considering his experience and professionalism, one could hardly expect him to share that information, not even with an old friend.
Spycraft leaves no margin for error, sentiment or dropping one's guard...
If Geralt chooses to intervene and fight Dijkstra:

...Thaler should have known this, but instead he left himself exposed and only escaped death thanks to Geralt's intervention, his life saved by the witcher's departure from his usual neutrality.

If Geralt chooses to not intervene and lets Dijkstra kill Thaler:

...Thaler died in a violent bout of political maneuvering when it turned out his plans conflicted with the greater good of Redania. 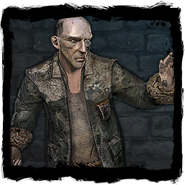 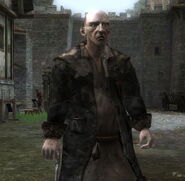