The Ballista is a quest in The Witcher 2: Assassins of Kings.

This quest is given to you by Vernon Roche upon entering the frontyard of Loredo's residence, during the main quest line of Chapter I. Your objective is to disable the ballista.

Talk to the prostitute nearby, you can ask her to "surprise your friend". In order for her to accept your request, you can either pay her for the job or defeat two men nearby, Myron and Alphonse, at arm wrestling. While she is off distracting the ballista guard, you can go to the ballista and remove a piece of it, thus completing the quest.

While visiting the commandant, Geralt had a chance to admire Loredo's newest acquisition. It was neither a swift steed nor a new piece for the local ruler's art collection. It was a brand new ballista, aimed straight at the harbor. As you can see, midlife crisis can assume many different forms.
If Geralt persuades Margarita to seduce the guard, without paying:

Margarita, a local prostitute, offered to help. She promised to distract the guard provided that the witcher would first humiliate a couple of bullies named Myron and Alphonse. The two brutes liked to beat up the girls from the brothel, and Geralt was to teach them a lesson. The witcher, always sensitive to the plight of women, agreed to help the courtesan.
Geralt defeated both bruisers at arm wrestling. He proved they were not as tough as they thought. You should have seen their faces! Thus our hero had fulfilled his end of the bargain.

Margarita went forth to do her work. The witcher watched with admiration as the woman seduced the guard with minimal effort.
With the machine no longer guarded, Geralt got to work. As skillfully as an experienced saboteur, he removed a part from the triggering mechanism, thus completely disabling the ballista. The damage was hard to notice and would be even harder to repair. In any case, Loredo's new toy was now useless. 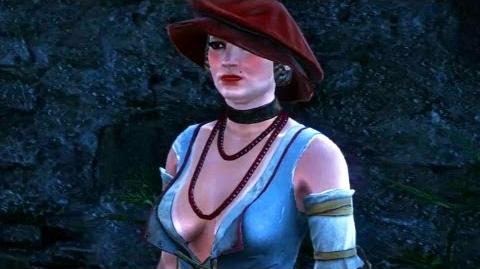 Retrieved from "https://witcher.fandom.com/wiki/The_Ballista?oldid=512451"
Community content is available under CC-BY-SA unless otherwise noted.