The Assassins of Kings

The Eternal Battle
Lost Lambs
The Path to Vision
The Spear of Destiny
Faith Symbolized
The Blood Curse is a quest in The Witcher 2: Assassins of Kings. This quest is obtainable only by choosing to follow At a Crossroads: Vernon Roche quest line.

When you visit the site, there will be numerous things to look at. Inspect the wheel to get the nail and the altar to get the note and a square coin.

If you keep running along the wooden pickets, you will come across a few Rotfiends and three corpses for "The Rotfiend Contract". After you finish killing them and lighting the bodies on fire, hug the left wall until you see a path to a cottage. The harpies here should have infinite spawn, so you should just run past them and towards the house, where you will see the visionary. There you have the option of bribing him or joining his cult. The latter should be better as you get to kill an arachas and a few endregas for XP. To do the ritual, head to the area marked and wait until anytime between dusk and midnight. Then, drink the potion and you will proceed to see a funny cutscene.

You can essentially keep running straight until you see a blue mist. Use your medallion and an orb will appear leading you out of the battlefield. Avoid fighting and you can get out quickly. Eventually there will be a fork in the road, where you will take the left and a cutscene will trigger and you will reach Vergen if you continue on that same path.

Saskia will tell you that Skalen Burdon has the spearhead. To get it you only need to defeat him in a game of dice poker. You have the option of playing him again to win additional items.

To lift the king's curse talk to Henselt then proceed to the site of Sabrina Glevissig's execution. Once there, Henselt will direct you to the spot from which he watched the execution. This site gives Geralt a good view of the execution site. In the next scene you'll need to direct Henselt as he walks the path illustrated on the image of the goat skull found in Dethmold's grimoire. The path he takes should be a traversal of the path without visiting the same vertex twice.

Ritual Order (the most elegant traversal)

Given that Henselt begins while standing in the pixie ring (mushrooms), he can also use the reverse of the above traversal.

After the rune has been drawn, a cutscene has the king scribe a circle around the whole rune, then stay inside the protective circle where you will be able to cast Igni using the button prompt at one of the points to light the pyre in the center.

After a cutscene, kill a number of wraiths (probably 9 or so) after which the king will stab Sabrina's ghost with the spear and trigger another cutscene. Note that running out of the ring while fighting the wraiths will cause your vitality to drop. The king invites you to his tent for a drink. When you arrive, the king informs you about Temeria's inheritance problem with no direct heir to the throne except Foltest's sister's child. Assassins arrive to kill the king during dialogue, so be ready for another battle before meeting the King. 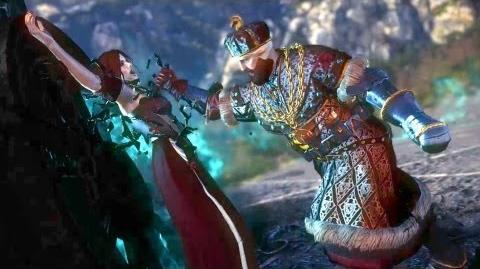 Geralt directing the king through the path

The king inside the fully drawn circle